At 13, Kevin Curnutt Lost Almost Everything to a Gunman's Bullet. What the Decades Since Have Taught Him, and Can Teach Us Now

On Super Bowl Sunday in 1981, football was the last thing on the minds of the two young friends, Trey Shelton and Kevin Curnutt. The winter afternoon was warm and sunny, perfect for riding dirt bikes on the rural outskirts of Arlington, Texas. That day, Kevin saw Trey and his bike cross a shallow stream and disappear over a hill. That would be the last memory of Kevin’s idyllic childhood. 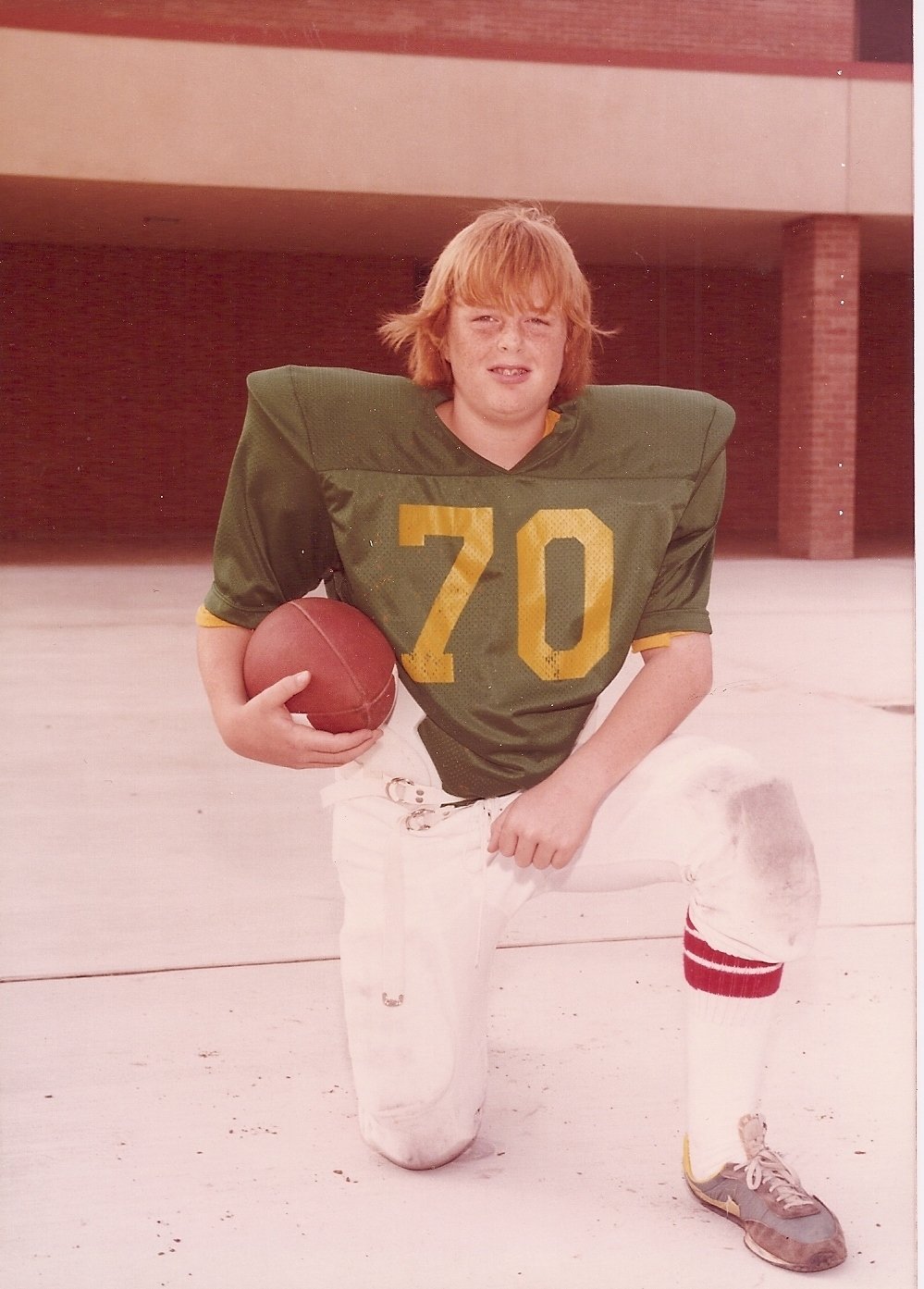 Kevin Curnutt, shortly before it happened.

Waiting on the other side of the hill that day was a neighbor named Richard Tiedemann, a Princeton-educated aerospace engineer who worked for a local defense contractor. As a young boy and his horrified mother watched, Tiedemann leveled his shotgun and blasted Trey off his bike. He ambushed Kevin seconds later, then calmly returned to his home close by, where he was killed by a SWAT team that night. Tiedemann’s only motive, so far as anyone could discern, was that he didn’t like the noise.

Trey died almost instantly. He was fourteen. Kevin, who was a year younger, survived his head wound, but despite more than a decade of rigorous rehabilitation that included hundreds of devoted volunteers, he would be paralyzed from the neck down for the rest of his life. 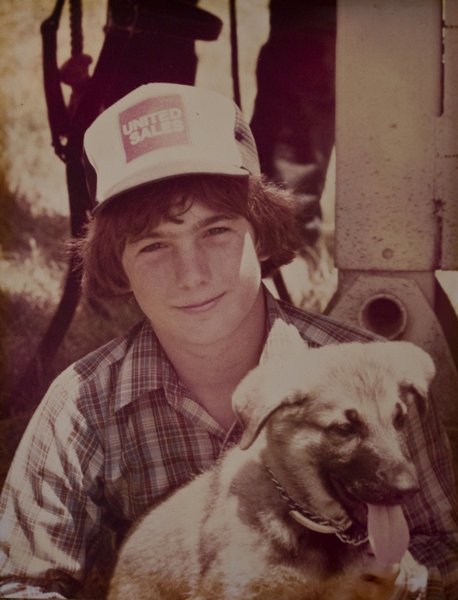 I met Kevin a decade ago. By then he was a man in his forties, his long frame folded into a wheelchair. And he was happy. The story I later told in a 2010 newspaper series was a celebration of the human spirit, the triumph of good over evil. Kevin remains a close friend and one of the wisest, most compassionate, and peace-filled human beings I know.

We’re now at work on a book about his life, but a few days ago, we took time out from that project to discuss current events and how his experience might be useful in our suffering world.

Tim: How do you process what’s going on right now?

Kevin: I’m fortunate to be at a place in my heart and soul where there is calm and peace and I know that’s never going to go away. So there is not any panic or any fear or anything like that. I have the utmost confidence that we will get through this.

And it’s like you wrote in your blog the other day—it’s a crisis and we should look at it as an opportunity to grow. Regarding the quarantine itself, I think we should focus on what we can do, not what we cannot do. The possibilities are endless. Read a book. Go for a walk. I’ve been trying to refine my meditation practice and I would suggest others do the same. Whenever anyone feels stressed or anxious, just take a moment, turn off the news and take a few minutes to breathe deeply and try to find your center.

Tim: You said you had found a deep peace that wasn’t going away. What is that and how do you know?

Kevin: I just feel it always within me. Things can happen, like the coronavirus or other things in the news, or the things that happened in my life. But I will always remain who I am in my soul and in my heart, a place of calm. Of course, both my parents are elderly and in the at-risk category and I certainly wouldn’t want anything to happen with them. But I don’t live my life in fear, just like I don’t live my life in anger.

Tim: Because you’ve discovered a deeper place, I guess.

Kevin: That place is the present. It’s not worrying about what has happened or what will happen, it is about what is now, right here, right now. This moment is enough.

Tim: Millions of people are experiencing a version of what you did that day when you were thirteen. You were riding dirt bikes and being a happy kid, then in an instant, because of an evil act, it was all gone. Today, so many were just living their lives and…Do you think that is a reasonable analogy?

Tim: I think it’s important to mention that, after your rehab program ended, you found yourself in a very dark place, consumed with thoughts about all the things that you would never be able do in life. 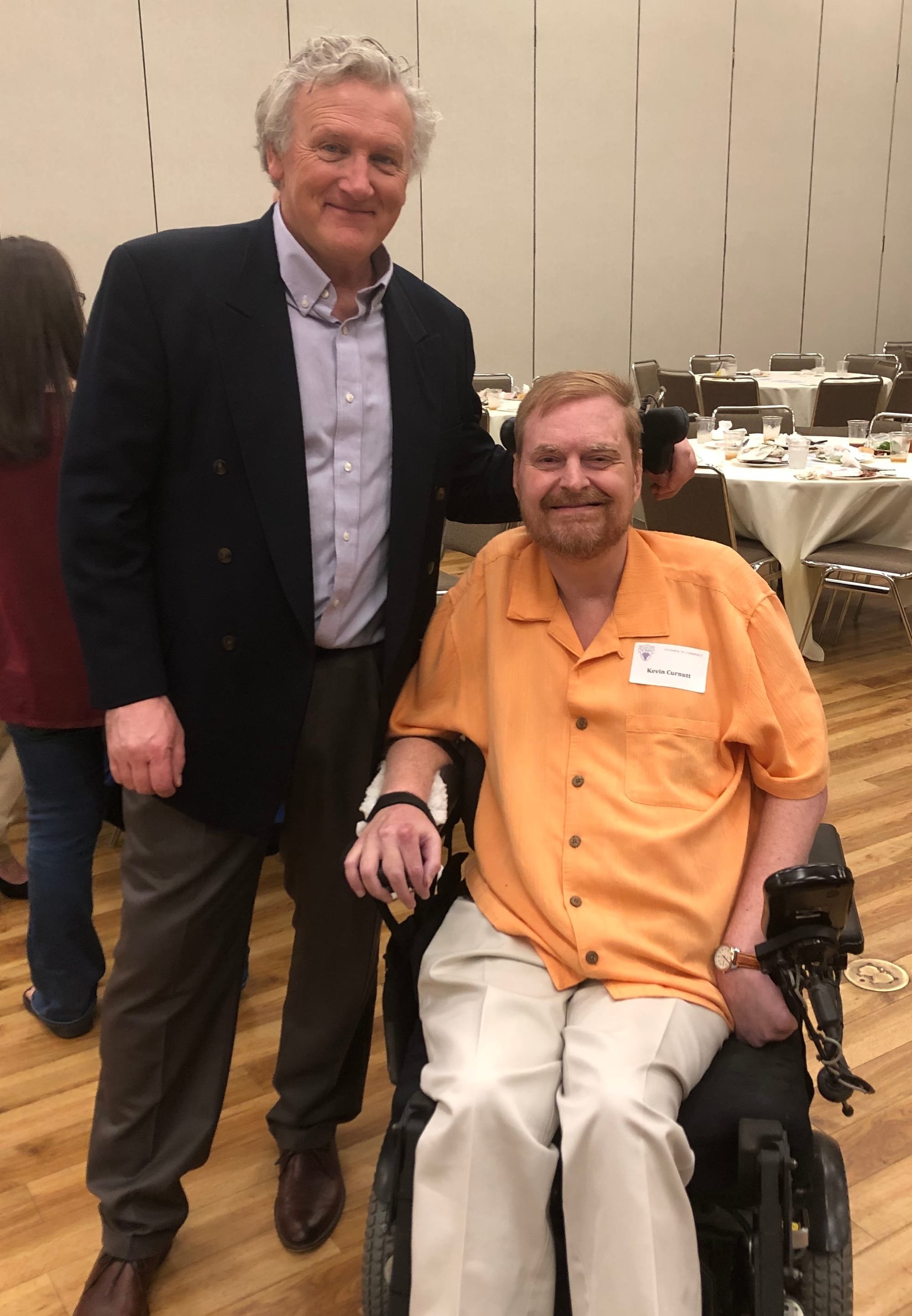 Kevin: I was deeply depressed and looking for answers about my life and which way my life would go, and even if my life would continue

Tim: Then a couple of books changed everything.

Then Covey wrote about Viktor Frankl.

Tim: The author of Man’s Search for Meaning.

Kevin: Yes. Frankl was a Jewish psychiatrist in Austria who was interned in a death camp during World War II. He discovered that it doesn’t matter what anybody takes away from you, or what anybody does to you, or the situation, it’s how you respond that’s all important. Those two books had a great influence on my life.

Kevin: That’s what we’re talking about. The last of the human freedoms is to choose your reaction to any given situation. That could be with anger and despair or it could be with love and kindness and acceptance and peace. But it’s your choice. Every person has a choice about how they react to any situation. A lot of people don’t realize that they have the choice, but they do.

Tim: Those two books started you on a long period of spiritual exploration. I know the teachings of mythologist Joseph Campbell became important to you. And you started to study Eastern traditions, among many other things.

Kevin: Another book that brought me really deep understanding of the way things are and the way things would be with me is The Tibetan Book of Living and Dying, where I learned about meditation and impermanence and acceptance.

Tim: Why are those things important?

Kevin: Acceptance goes back to the choice. We have to accept things as they are right here and right now. That’s the cause of much of the emotional pain that we see today, people wanting things to be other than they are. But we have to accept the way things are in this moment and then move on from that. That doesn’t mean we roll over and die. But it means to come to peace with the way thing are right here, right now. Then we can move forward and try to change things if we can. And if you can’t, just come to peace with it.

Tim: Why is meditation important to you?

Kevin: Generally, it quiets my mind. Ordinarily we have all these thoughts running together, mostly driven by the ego. What I want. How life is unfair. That sort of thing. Selfish thoughts. But when we quiet those selfish thoughts, it allows us to get in touch with what is beneath them, our true nature, which I believe is the love of the heart and soul. If we can quiet those selfish, egotistical thoughts, then we open ourselves up for love, kindness, peace and compassion.

Tim: This afternoon I was watching a video of Eckhart Tolle. I know you’re familiar with him and share his philosophies. He says that we exist on two different levels. One is the physical realm of bodies and viruses and egos, etc. The other is the true nature that you refer to. Others call it the soul, a deeper, transcendent level which is not susceptible to the challenges and tragedies and difficulties of life.

Kevin: Yes. I often post on Facebook about the foreground of life and existence. There is tremendous pain in the world and trouble, but that’s just the foreground of existence. The background, the foundation, is love and compassion and peace. That is exactly what we’re talking about. The true nature of the human soul, eternity, the eternal silence of the soul. Eternity has nothing to do with time. But eternity has to do with depth. The endless depth of the human soul is eternity. That's where I try to live from.

Tim: I have a confession to make. I’ve always been a bit skeptical, thinking that at some point all this would fail you, at least momentarily. But I’ve known you a long time and that has never seemed to be the case. If anything, this seems stronger in you today than ever.

Kevin: I’m not going to say that I don’t have my moments. I do. But I know they are transitory. And I know I will always have a place of deep peace within me which I can return to and try to live out of always. And that won’t ever change.

Tim: I’m glad to hear you say that you've had your moments. I’ve become a big advocate of people having their moments, as you say, but not being ashamed of their pain. Suffering can be redemptive and you are a great example. Your own pain led you to this place. Had this not happened to you, it’s reasonable to think you never would have discovered this sacred dimension.

Kevin: I think that chances are very good that I would not have discovered that place and if I had, it would not be to the depth of what I’ve discovered. Have we ever talked about something called post traumatic growth?

Kevin: I came across that term years ago. That’s the opposite, or might go hand in hand, with post-traumatic stress. When you go through a traumatic event like my event, my shooting or this coronavirus or whatever the trauma might be, and you learn how to deal with it, you are much stronger, and much more peaceful and capable of dealing with anything. That’s post traumatic growth.

Tim: That’s our wish for the world right now, right? This has been a really difficult time, but our wish is that we all experience some form of post traumatic growth.

Viktor Frankl suffering coronavirus eckhart tolle spirituality
Someone To Tell It To
The Puppy and the Pandemic
Hard Realities and Hope. A Conversation With My Friend the Physician, Writer and Thinker, Dr. Craig Bowron
Comments
985-245-1730
Fort Worth, Texas, United States