Fred Rogers, Richard Rohr and the truth about anger

This passage from the great Catholic writer Richard Rohr really struck me when I read it a few days ago.

Richard RohrAnger is good and very necessary to protect the appropriate boundaries of self and others. I would much sooner live with a person who is free to get fully angry, and also free to move beyond that same anger, than with a negative person who is hard-wired with resentments and preexisting judgements. Their anger is so well hidden and denied—even from themselves—that it never comes up for the fresh air of love, conversation, and needed forgiveness.

Rohr's words reminded me of the day many years ago when a good friend said this to me: “There is a lot of anger in you.” She said it kindly, as an observation not an accusation, but I was stunned nonetheless.

From the time of my boyhood, my persona of choice was the “good guy.” I tried to wrest security and satisfaction from life by pleasing others, often at the expense of myself, and anger just did not fit that schtick. So I repressed my rage and turned my anger in on myself. The result was a deep and chronic depression that by early adulthood threatened to consume me.

I have had a lot of company in this regard. In our recent book on grief, Dr. Patrick O’Malley and I write about the “culture of positivity,” defined by one psychologist as “the widespread social practice of eliminating any attitude and utterance that doesn’t have an uplifting effect on one’s mood and those around them.

“The pressure to think positive pervades our everyday language and practices. It’s the reflexive response, ‘Put on a happy face,’ if we are not smiling. ‘Think cheerful thoughts and good things will happen.’ We feel pressure to display a pleasant countenance even if it is insincere. And we often feel guilty if we’re not quite able to don that cloak. The underlying belief, it seems, is that hurt and discontent can be done away with simply by acting as though it isn’t there.”

Which is crap, of course. But that cultural ethos made it safer for me to turn my anger inward toward my own destruction than acknowledge it as a normal and yes, necessary, part of my humanity. 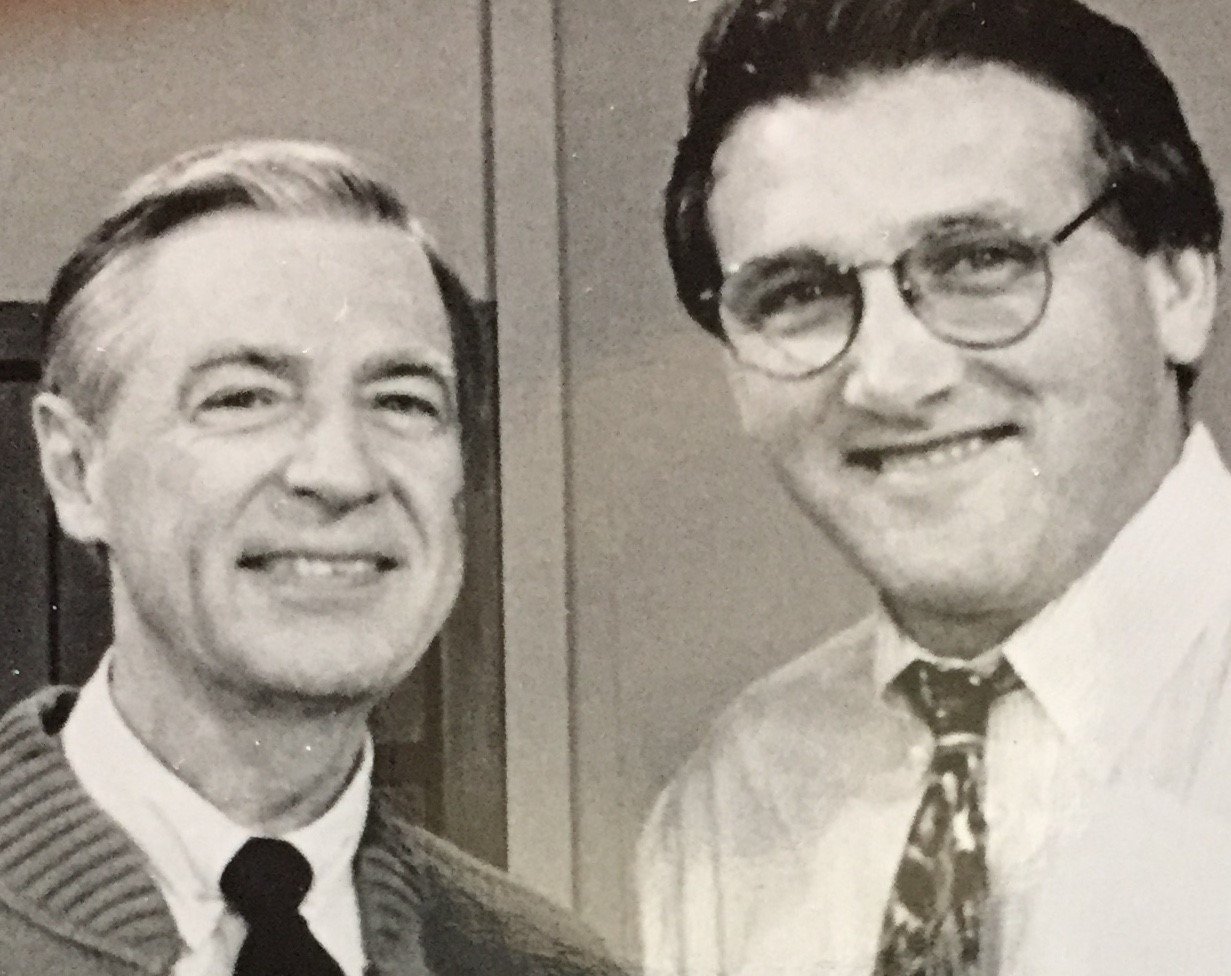 Fred and Tim, 1995Fred Rogers was among those who led me toward truth and healing. I believe one of the most profoundly helpful things Mister Rogers ever said was this:

“There's no ‘should’ or ‘should not’ when it comes to having feelings. (All feelings, anger, sadness, rage.) They're part of who we are and their origins are beyond our control. When we can believe that, we may find it easier to make constructive choices about what to do with those feelings.”

Fred’s words about his own anger were an important part of our first face-to-face conversation. That day in October 1995, sitting in his small office in Pittsburgh, he began to share about his long-time friend Jim Stumbaugh, who had died of cancer a few weeks before. Fred said he was angry at the disease.

“With grief there is, inevitably, some times of anger and, you know, God can take our anger,” Fred said. “I think God respects the fact that we would share a whole gamut of feelings. I’m a real person. I think kids understand that.

“I’ve told the children there are many things you can do with your feelings that don’t hurt yourself or anyone else, particularly the so called ‘negative’ feelings, anger, sadness and rage. If there is one service I feel television could offer in this world, it would be to give as many examples as possible of people expressing their anger in healthy ways. We see just the opposite on television.”

Hence the title of one of Fred’s most important songs.

What do you do with the mad you feel (when you feel so mad you can bite?)

Pound on dough or clay, the song suggests, or organize a game of tag.

I’m a little old for tag, (or maybe I’m not). But I have long come to accept that on that day long ago, my friend was right about my anger, however deeply buried it might have been at the time. The biggest part of my journey of healing over the decades has been first acknowledging, then embracing my anger and rage. Now, instead of turning that dark energy inward, I pour it out in journals, share it with trusted others, and try to express it in ways that doesn’t hurt others, though I’m not always successful in that regard.

Some days, during my quiet time in the morning, I simply try to tune into a small voice inside me that says, “You’re really angry today, you’re really hurting.” No judgment there, just self-compassion. Or some days my prayer is simply this, “God, I’m really, really angry.”

And I agree with Fred. God can take it.