From the desert: Fred Rogers' remarkable request of my dying brother

Tim Wright and I were born a few days apart in December 1957. (He’s older and rather looks it, I think.) Which is to say that Tim and I are both on the far side of a generational divide in America. Either you were a Captain Kangaroo kid or a Mister Rogers kid and we were both Captain Kangaroo guys all the way.

Until I met Fred Rogers on a newspaper assignment in the fall of 1995, I knew more about Mister Rogers from the Eddie Murphy parody on Saturday Night Live than I did from watching Fred’s show myself.

Tim Wright’s introduction to Fred’s human greatness came much more recently. He is the pastor of a wonderful church, Community of Grace Lutheran in the Phoenix suburb of Peoria, Arizona. It was a church member who recommended that Tim watch the deeply moving and insightful documentary of a few years ago, Mister Rogers and Me, produced by my friends, Benjamin and Christofer Wagner. 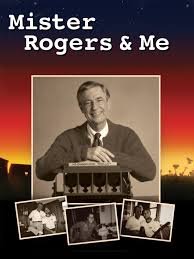 “As I was watching, I thought, ‘Wow, I really missed something here,’” Tim told his congregation on a recent Sunday. “This was an incredible man.”

The film inspired the pastor to read my book on my friendship with Fred, which in turn led to an invitation for me to spend what would be a magical, whirlwind weekend in the Arizona desert. I shared a highly meaningful hour with twenty men at a sunrise bible study on Saturday, was interviewed about Fred on a local television morning show, took part in three worship services and then gave a longer talk at Tim’s church on Monday night.

During the services, Tim used his sermon time to ask me about my unlikely relationship with the children’s television icon, focusing on two letters I wrote to Fred—and more importantly, how Fred replied.

In the first, written in the painful summer of 1996, I told Fred that I never felt like my father was proud of me. “So I have a question to ask you, Fred,” I wrote. “Would you be proud of me?”

“The answer to your question is YES, a resounding YES,” Fred replied. “I will be proud of you, I am proud of you, I have been proud of you since first we met. I’m deeply touched that you would care to share so much of yourself with me and look forward to hearing all that you would care to share in the future. Nothing you could tell me could change my ‘yes’ for you. Please remember that. Your place in this life is unique, absolutely unique. Do you know how special you really are? Yes, Tim, yes. Love, Fred.”

The second letter was a confession of sorts, written many months later at the moment of my greatest shame.

“Please know that I would never forsake you,” Fred replied. “That I will never stop loving you. That I will always be proud of you. Those of us who care about you are privileged to share your pain…You are my beloved brother, Tim. You are God’s beloved son.”

To Tim Wright, Fred embodied the motto Tim and his people had adopted years before. Their church would stand for “bold, reckless grace.”

“What’s amazing to me is that he’s just speaking Jesus’ words to you,” Tim said to me during one service. “To have the humility, courage and the passion to just speak grace…it revolutionized so many lives because people crave grace so deeply.”

Tim’s perspective has actually altered the way I look at Fred and his human greatness. It is true—a real courage, a quiet steeliness underlaid his desire to live a life of compassion, presence, love and non-judgment. I was reminded of what writer Tom Junod called Fred’s “unashamed insistence on intimacy.” Fred was certainly bold, and if not reckless, per se, he was a historically radical force for good.

On Monday night at Community of Grace, I told the story of how Fred’s compassion had transformed my relationship with my father. (I wrote about that in my last post, which you can read here.)

For the first time in years, I also talked publicly about my brother, Steve. By the summer of 2000, a tumor had encircled his spinal cord, leaving my brother paralyzed from the chest down, a once strapping forty-one-year-old man about to leave behind a wife and two young boys.

Fred was very much a part of the tragic but inspiring journey we took with my brother. On several occasions I described for Fred how the disease had changed Steve's life, had delivered him from his many furies; gave him a deep peace and wisdom; made him a more attentive and loving husband and father; caused him to savor the first sip of coffee in the morning, the taste of strawberries and whipped cream, the song of a cardinal outside his window.

“Steve is teaching us all now,” Fred told me once.

Fred called Steve at his home in Davenport, Iowa, just a few weeks before my brother’s death. The rest of the family gathered in the kitchen to eavesdrop as Steve told Fred that terminal cancer was the best thing that ever happened to him.

Then, after a few minutes, Fred did something remarkable, bold, radical. He asked Steve to pray for him. Shouldn’t it have been the other way around? But Fred believed that anyone who suffered as Steve had suffered must be extremely close to God. Fred genuinely wanted Steve’s intercession. Until Steve was too weak to pray, he received it.

On the night of Steve’s death, this email arrived at his home, addressed to me. I closed my talk in Arizona by reading it to Tim Wright’s people.

“After a long day at work, I came home and told Joanne (Fred’s wife) about Steve. We talked about you all during dinner. As usual I went for my after dinner walk in the park near our apartment. It was near sunset…and a gorgeous one it was. On my way back there was the most beautiful cloud formation illuminated by the last bit of setting sun. Tim, there are no adequate words for such beauty. At any rate all I could think of saying was ‘Thank You,’ so I did, and I prayed for you and your wonderful family gathered in such common purpose there in Iowa. It wasn’t long before something said to me, ‘Look up.’ Well, I did, and there in a completely clear patch of sky was the brightest new moon I had ever seen. It looked like a special apostrophe in the sky, and I thought, ‘Yep, it’s Steve’s for sure.’

“Just wanted you to know that you’re all in our hearts…more than ever. IPOY (I’m Proud of You) as always. Fred.”

When I finished, a long, sacred silence settled over those of us gathered in that desert church. I don’t think I was alone in feeling very close in that moment to what Fred often called, “the loving mystery at the heart of the universe that yearns to be expressed.”

Such was the power of my friend’s radical insistence to live and speak grace.

My gratitude to all the new subscribers to the Anything Mentionable blog. If you would like the blog and other book and speaking news delivered each week to your email inbox, visit www.timmadigan.net, scroll down from the home page and subscribe.