I’m deeply grateful to my friend Sid Ansbacher for restoring this memory of my brother, Steve, and my friend, Fred Rogers. I hadn’t read this or thought of it for years until Sid recently shared it with a friend on Facebook. It is from the fall of 1998, when Steve was diagnosed with lung cancer that would take his life two years later. Fred was very much a part of that sacred journey.

The following is from my book, I’m Proud of You: My Friendship With Fred Rogers.

My parents were visiting Davenport at the time, and when Steve and his wife returned home from the oncologist’s office with the terrible news, my mother handed Steve a copy of a little pamphlet called Living Faith, a monthly publication of the Roman Catholic Church that, with her bible, was part of her daily spiritual reading. The Living Faith message from that day spoke of a grain of wheat, planted by a farmer. Steve was awestruck by the timeliness of the little parable, reading it while standing by his dining room table. 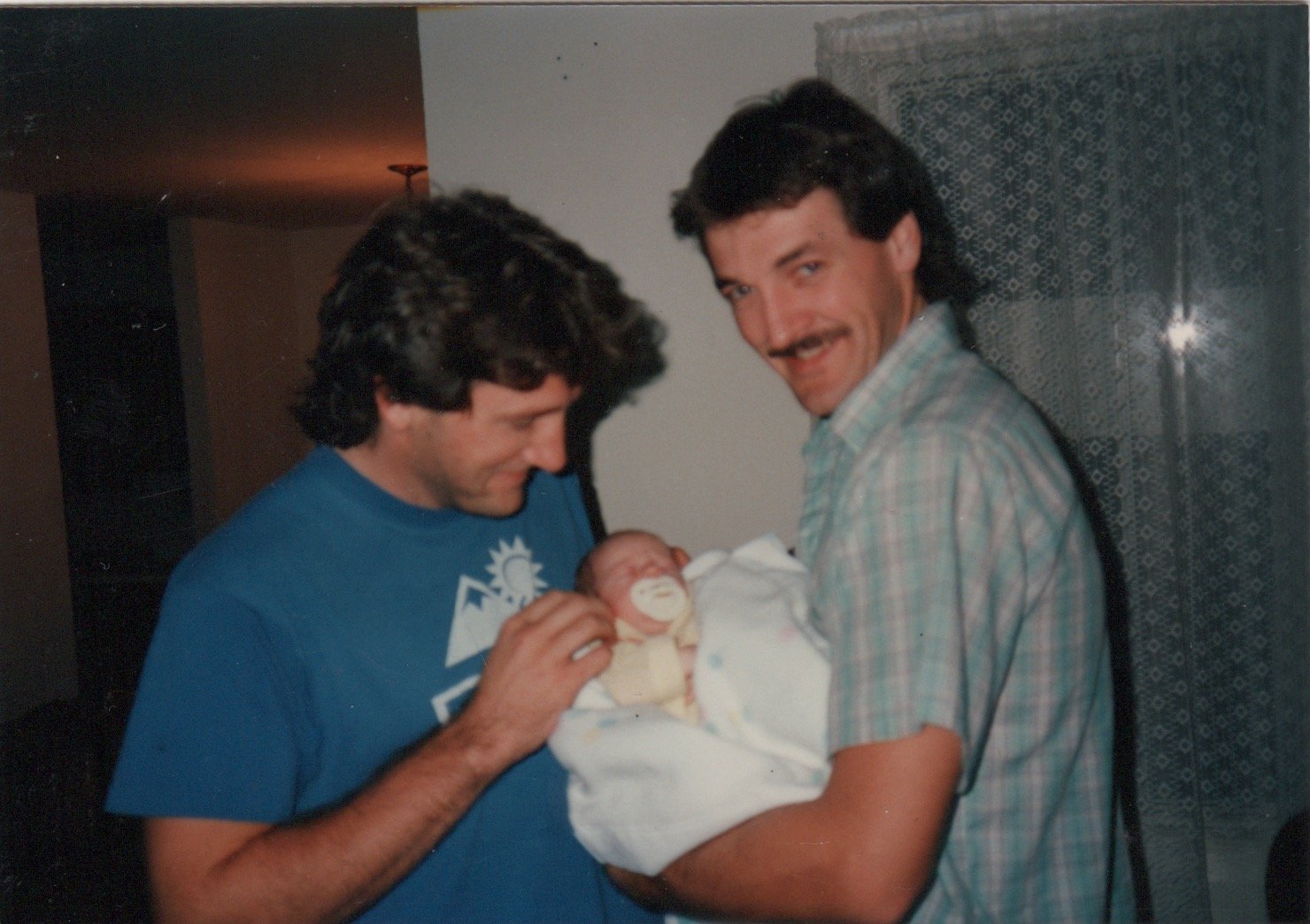 Tim, left and Steve, with Steve's newborn son, Timmy, in the late 1980s

If the grain of wheat could know fear, it would be paralyzed with anxiety at the thought of being dropped in the ground, covered over, put out of sight, doomed to inactivity, yet what a glorious harvest awaits it.

Although we merely project fear onto a grain of wheat, we know for sure that we have real fears. Fear of the unknown. Fear of not being in control at all times. Such fears limit our potential. We accumulate things, ideas, people, holding onto them tight, expecting to be enriched by adding on more and more. All the while, God is whispering gently in our hearts saying:

“Let go, dear one. I want to make something marvelous of you. Loosen up. Drop what is in your hand, your mind, your heart, and let me take over. I love you and have plans for you that pass your wildest imaginings. Only you must let Me be in charge.”

Steve had never been an overtly spiritual person before because he never had time. “He was always racing,” as my mother said. But now, faced with the most frightening ordeal humanly imaginable, he would be a grain of wheat ready to surrender himself to the great farmer. He framed the passage from Living Faith and kept it near him like a talisman, reading it several times a day. “Okay, loosen up. I’ve got to loosen up,” he would tell himself, over and over.

He soon began to speak with the wisdom of a mystic, describing his cancer as the best thing that had ever happened to him, a blessing that saved his marriage and brought all members of his family closer together. The deep, tender person I remembered from those boyhood nights reemerged. Steve suffered terrible nightmares and was often terrified of dying, particularly late at night when he was alone. But it was then, “in the depths of hell, that I feel closest to God,” he told my mother.

“Jubilate Deo,” Fred wrote after one of my regular updates on Steve. “Steve has already known what healing is all about. That’s the best kind of all. We never know, do we? Every day is a gift to each one of us … no matter what our present prognosis happens to be.”

In another note, Fred wrote, “Steve is teaching us all now.”