On June 1, 1921, a white mob numbering in the thousands destroyed Tulsa’s uniquely prosperous African American community, known as Greenwood. About three hundred people were killed and 10,000 left homeless. Photographs of the aftermath of that day in Oklahoma recalled Hiroshima after the atom bomb.

Also part of Tulsa’s grim tableau in those terrible hours was the sight of flatbed truck after flatbed truck, loaded with African American bodies, heading to destinations unknown. In the century since, African Americans in the city have insisted that many of those bodies ended up in mass graves. Preliminary geophysical studies undertaken for the Tulsa Race Massacre Commission in 1998 suggested as much.

Since then, Tulsa blacks have sought an official investigation to resolve the question of the graves. Their requests fell on deaf ears at City Hall, at least until 2016, and the election of Tulsa Mayor G.T. Bynum. From the time he took office, Bynum, a white Republican, hinted to black leaders that he was open to a grave search. He made it official with a stunning announcement two years later. 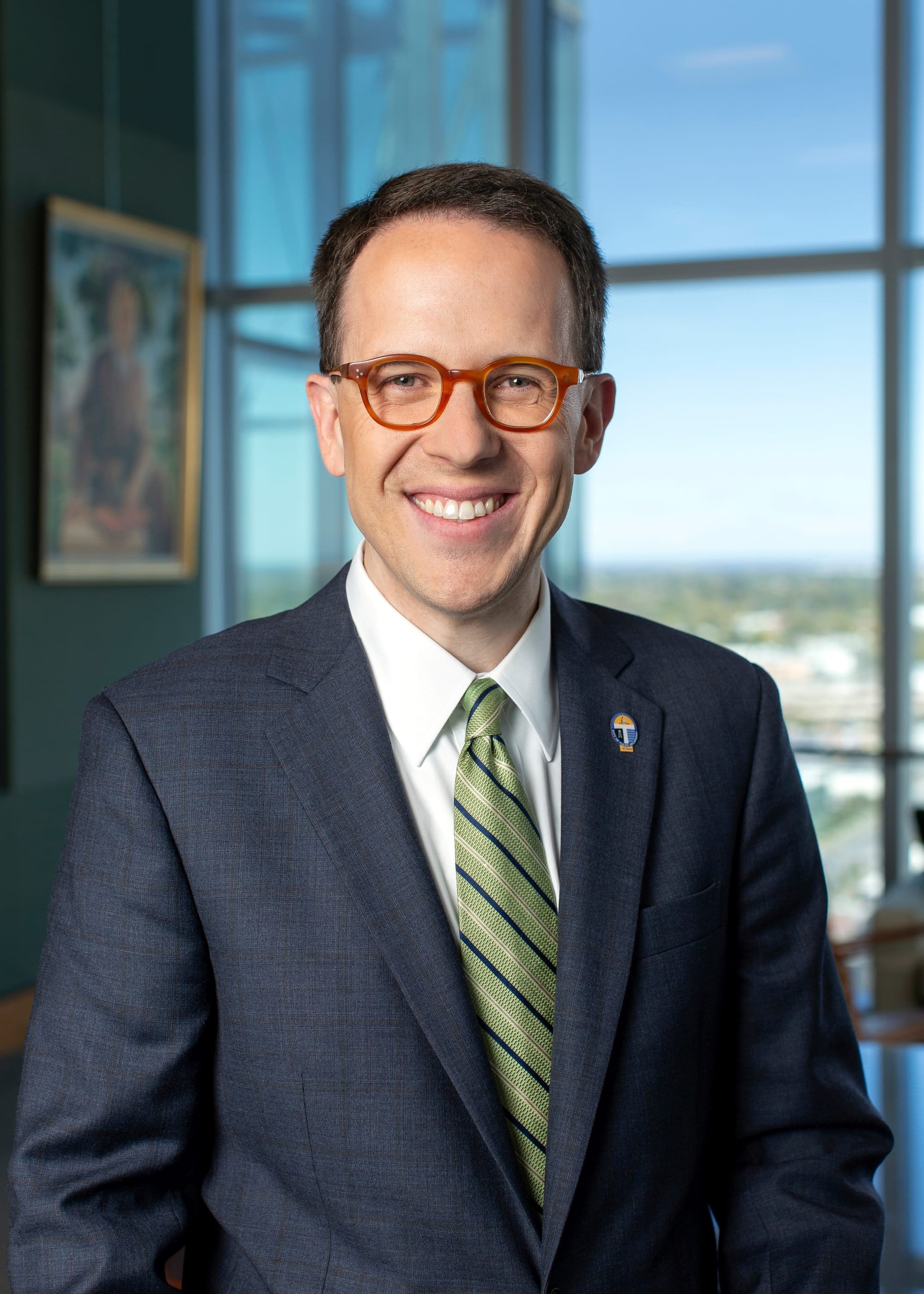 “We will follow the truth where it takes us,” Bynum has said. “We will pursue every avenue to look at these sites.”

Bynum’s Tulsa roots date to the late-nineteenth century, when his great, great grandfather was elected the town’s second mayor. Bynum’s grandfather held the same office in the 1970s. But for all of his family history, Bynum himself says he didn’t know about the Tulsa Race Massacre until he attended a political event at a Greenwood library in 2001.

That night, Bynum thought it absurd when a speaker described the massacre, claiming, among other things, that Greenwood residents had been bombed from the air. There was no way that something like that could have happened in Tulsa without Bynum knowing about it, he thought, But then he brought up the matter with his grandfathers, who were not alive in 1921, but had heard stories passed down through the years.

“It was just disbelief that this could have happened here,” Bynum told me a few weeks ago.

Then, about a decade ago, Bynum first heard about the possibility of mass graves.

“I reacted to that more as a dad than anything else,” he said. “I don’t want my kids growing up in a city that can have mass graves in it and nobody bothered to look and see if they are actually there or not.”

On a rainy Monday a few weeks ago, the first careful excavation began at Oaklawn Cemetery in Tulsa. That dig turned up nothing of consequence, but in some respects, the symbolism of the search, however it turns out, is as important as the outcome. Finally, after a century of looking away, Tulsa’s Republican mayor and many of the city’s whites had joined the African American community to confront a horrific past. 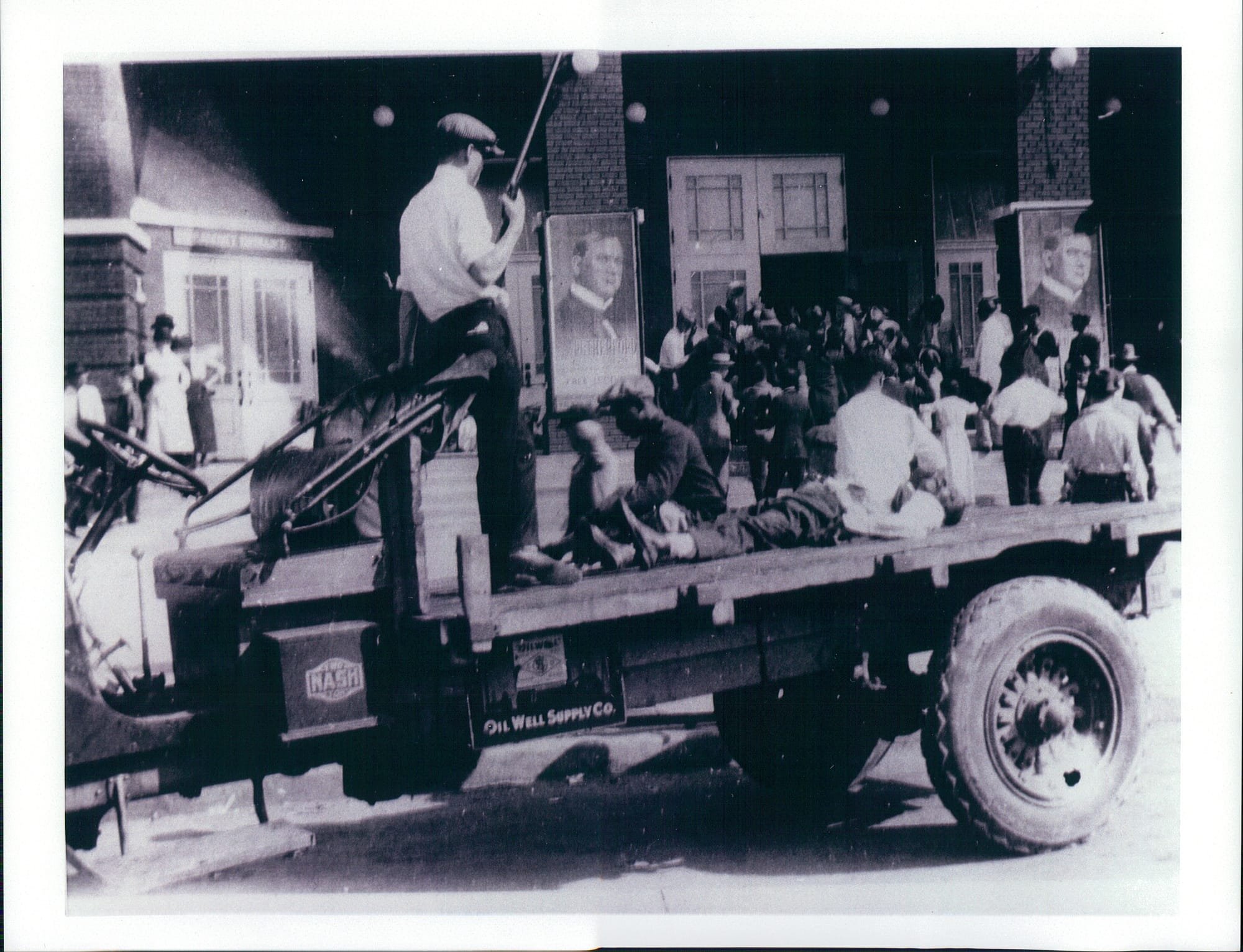 Part of the grim tableau

I recently interviewed Bynum for an afterword I’m writing for the new edition of my book, The Burning: The Tulsa Race Massacre of 1921. What follows are excerpts of our conversation, edited for length and clarity.

Tim Madigan: How do you think the massacre could have remained a secret in Tulsa for so long, even for someone such as yourself, who has such deep roots in the community?

Mayor Bynum: One of the ways I confirmed that it happened was that I went and asked both of my grandfathers about it. Each had grown up here. They both had stories to tell. They weren’t alive when it happened, but their parents had told them about it, so it became clear that it was something that was talked about within families, but never publicly.

The only explanation I’ve been able to come up with is that, almost immediately, the civic leadership in Tulsa realized what a disgrace this was for the city and how ashamed the civic leadership of the community was that this had happened. And they recognized, frankly, what a challenge it would be for our city moving forward, to have this reputation.

Most of the folks who were in positions of leadership in the city in that era were white residents who didn’t have their homes and neighborhoods and businesses burned down, so they just allowed it to go unspoken. Then you had succeeding generations grow up, and because it wasn’t taught in schools, it wasn’t written about in newspapers, you really didn’t hear about it.

One of the things that really led me to the grave search was the historical coverup. Then there is the issue of the graves where you have an entire part of our city burned down. People just disappear and the city does nothing to follow through on it.

What I kept coming back to throughout this process was this thought, ‘That’s what you hear happening in authoritarian regimes in foreign countries.’ They erase a historical event or that they have mass graves. When I first heard about mass graves I started thinking about Bosnia or the Soviet Union not thinking about Tulsa, Oklahoma. 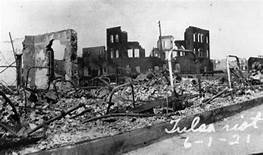 The aftermathMadigan: Going back to the early 2000s, African American leaders in Tulsa have been pleading for the city to search for the graves. Why were you receptive when so many others were not? Did you come into office with the idea you were going to do this?

Mayor Bynum: Oh yeah. It was 2010 or 2011. I was on the city council at the time and local journalist had written a story about one of Tulsa’s early civic leaders, Mr. Brady, exposing that Mr. Brady had been a leader in the KKK here in Tulsa. That created a series of public conversations that had not occurred to date.

After that, the journalist did a video series on Tulsa’s other hidden secrets. I was watching one of the videos and he’s standing in Oaklawn Cemetery, where my great great grandfather and his wife are buried. He’s saying, ‘Here in Oaklawn Cemetery, it is believed there are mass graves from the 1921 race massacre.’ Again, I say out loud, while I’m watching this video, ‘There is no way there is a mass grave in Tulsa, Oklahoma, and we’re all just walking around and nobody has looked for it.’ Then I call up the state archeologist and find out that is absolutely the case.

I worked with my colleague on the city council at the time, Jack Henderson. We went to the mayor, (Dewey Bartlett,) and said that we really ought to do an excavation and be able to tell people yes or no. We should be doing everything we can to be able to know if (mass graves) are true or not. He said, ‘No thanks.’

I thought at the time, ‘If I am ever mayor, we are going to follow through on this.’ So when I became mayor, we started the wheels in motion. That was the chain of events that led us to this test excavation of the last several weeks.

Madigan: You must have faced a lot of criticism. 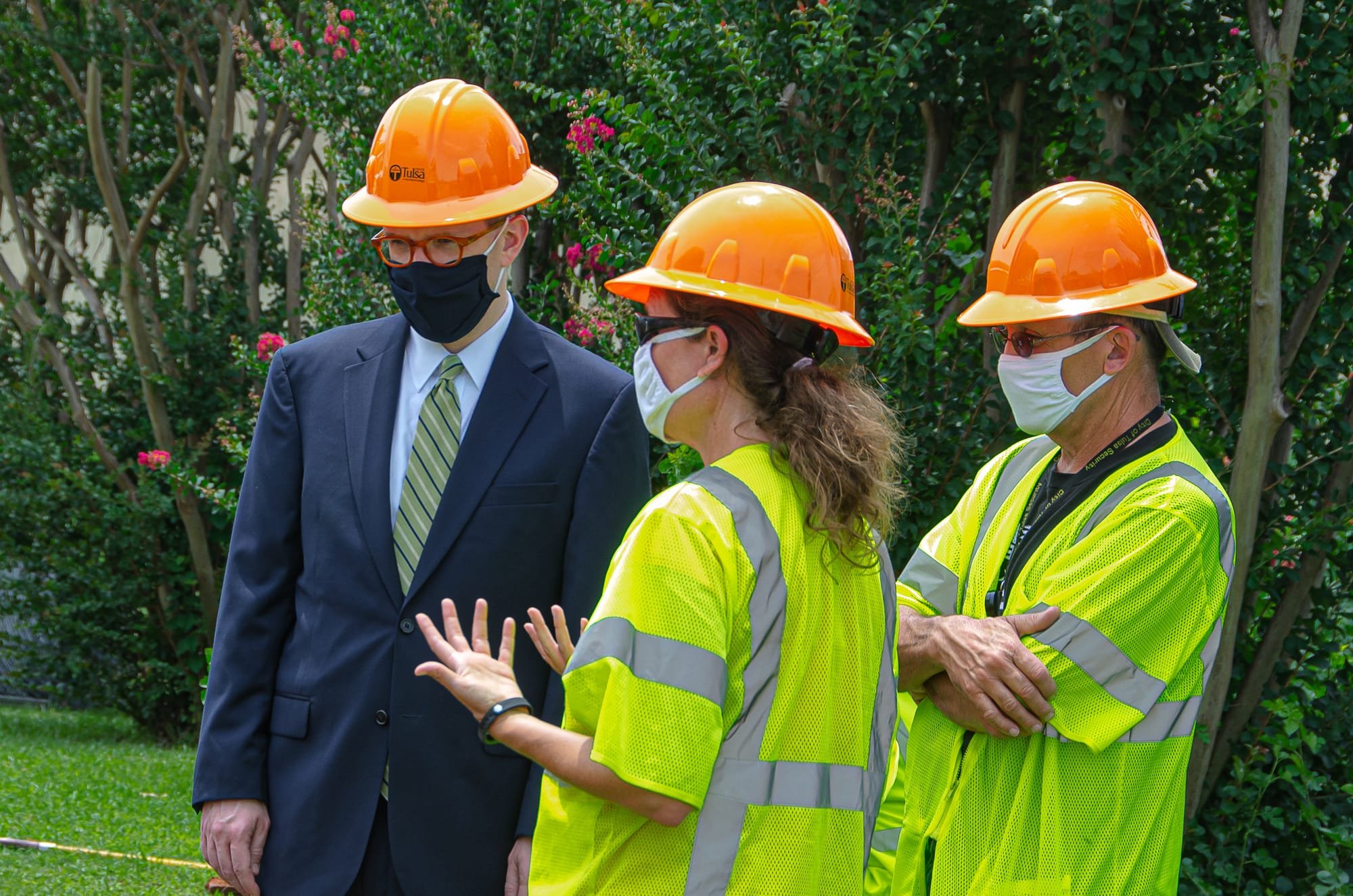 Mayor Bynum: I think so many mayors had not acted on it because there was this fear that there was going to be a massive backlash against it. When we first started talking about it, the thing that surprised me the most was, instead, the vast majority of people I heard from said, ‘It’s about time. We want to know if there are mass graves in our city as well.’

Mayor Bynum: Oh yeah. It hasn’t been all sunshine and roses. Some white Tulsans think it’s a waste of money. I’ve had some say, ‘You’re trying to make all the white Tulsans who lived in Tulsa in 1921 look bad. My response to that is, ‘My family were white Tulsans who lived in Tulsa in 1921. I’m not trying to make them, as a blanket statement, look bad. But if my family had been murdered in 1921, and the city didn’t do anything to find them for ninety-five years, I would sure want the city to be doing that now.’

Madigan: When I heard that the driving force behind this was a white Republican mayor, I thought, man, that’s interesting.

Tim: Last question, on a somewhat different topic. What was your reaction to the opening sequence of the HBO series Watchmen, which graphically depicted the massacre? Because it was so horrible, many people assumed it was fiction.

Mayor Bynum: That opening sequence, when they show the early stages of the massacre, that was just gut wrenching. By that point I had read a lot about it, but to see it visually portrayed in such a realistic way, and they did just a superb job of recreating the area. It filled me with dread. Dread is the word that came to mind, just the sense I had in watching it.

But I also am incredibly grateful. There are so many tragedies related to that event, but one of them is that, the people who tried to cover this up were successful for so long. And to have a show like that raise awareness of it all around the world through popular culture, I think is a great accomplishment. It’s one way we can make sure that the bad guys didn’t win.

We can’t bring folks back to life, but we can make sure that those who tried to cover it up were not successful.

click here to obtain a copy of the Burning, Tim's definitive book on the Tulsa Race Massacre of 1921

Tulsa Race Massacre tulsa Mayor G.T. Bynum George Floyd
"Sick From What I See." An excerpt from The Burning: Massacre, Destruction and the Tulsa Race Riot of 1921
Comments
985-245-1730
Fort Worth, Texas, United States