My last conversation with Fred Rogers (nine days after September 11, 2001)

From Chapter 16 of the Tim's book, I’m Proud of You: My Friendship with Fred Rogers

When Fred was a boy in Latrobe, Pa., his mother taught him how to look for hope during the darkest times.

Fred never forgot his mother's admonition, never stopped looking for the helpers and celebrating them, which was certainly true in the days after the terrorist attacks of September 11, 2001. While shocked and saddened by the nightmare of that day, Fred also marveled at the firefighters and police officers at the World Trade Center who died trying to save people they didn't know; and all those who tirelessly dug through the rubble in the aftermath; and the thousands who lined up to give blood. 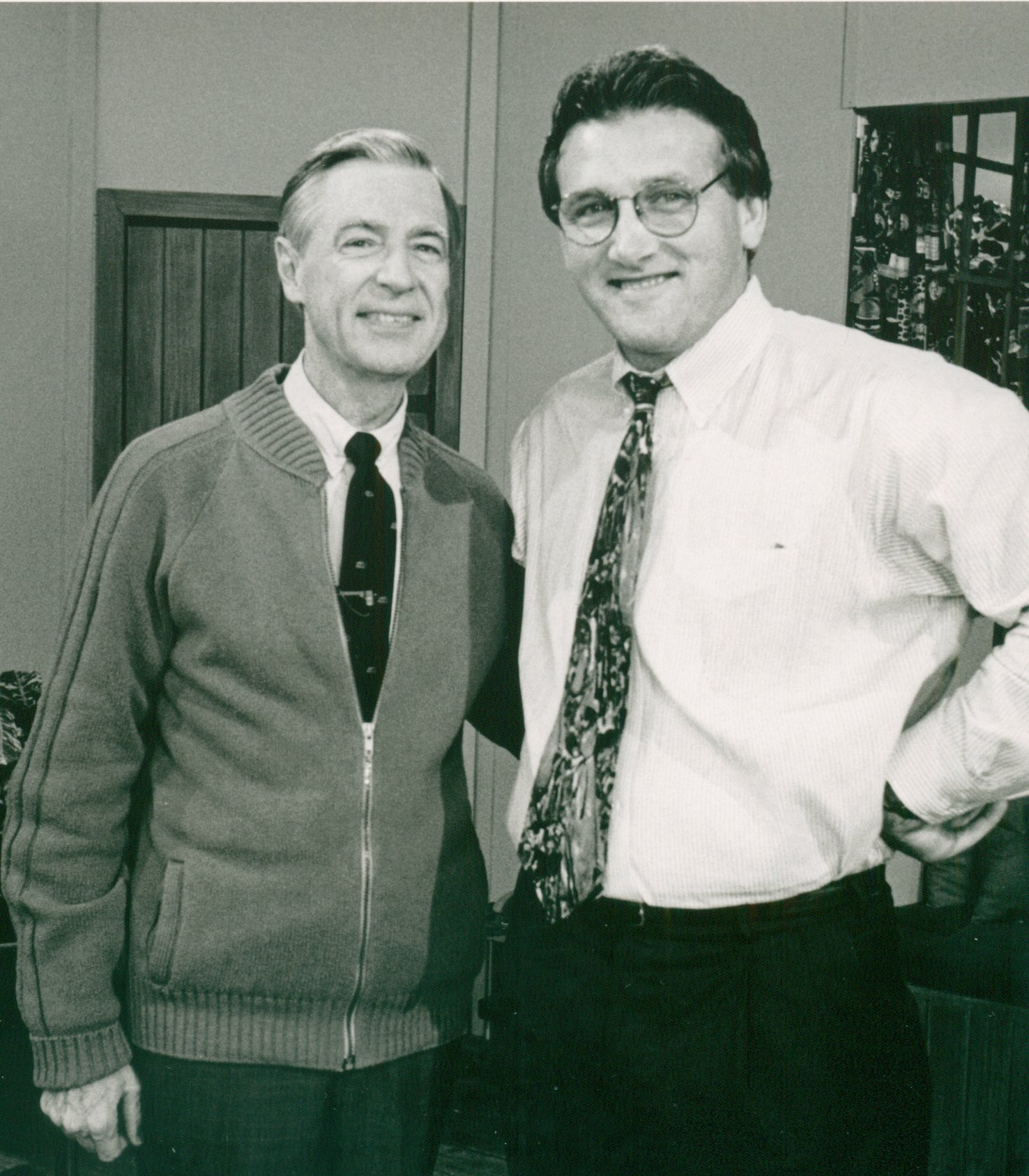 With Fred on the set of Mister Rogers' Neighborhood in 1995

When we talked by telephone on a Thursday night nine days later, Fred told me of a young violinist from the Juilliard School who played for rescue workers until she could no longer lift her arms.

Actually, it was (Tim's wife) Catherine who spoke to Fred first when he called our home that night, telling our friend how we had tried to tide our children through the horror while nursing our own wrenching sadness. As the two of them talked, I actually remember becoming impatient for my turn on the telephone because I had thought of Fred so often since 9/11, wondering how a man of his spiritual insight and greatness would come to terms with such evil.

Nancy McFeely Rogers, as it turned out, would have been proud.

“'There are always helpers,” he told me that night. “This country has demonstrated that better than I ever could have imagined.”

I was struck by the peace in Fred's voice that night, a calm that reflected his deep faith in the ultimate goodness of humanity that, if anything, had deepened in the days since the attacks. I remember feeling strangely peaceful that night myself and told him so.

“As horrible as this has been, I just feel like this is a real opportunity, a turning point where people have a chance to make a real difference in the world,” I said. “Does that sound strange?”

I told him that the catastrophe inspired me to try and live out the words of my favorite prayer.

Fred immediately recognized the first line of the Prayer of St. Francis. He answered with the second. “Where there is hatred, let me sow love,” he said.

“Where there is injury, pardon,” I replied.

Then, for the rest of the prayer, Fred and I alternated, line by line, speaking quietly on the telephone:

Where there is doubt, faith;

Where there is despair, hope;

Where there is darkness, light;

Where there is sadness, joy;

O Divine Master, grant that I not so much seek to be consoled as to console; to be understood as to understand; to be loved, as to love. For it is in giving that we receive. It is in pardoning that we are pardoned. And it is in dying that we are born to eternal life.

There was a long silence on the line when we finished, as Fred and I let our shared prayer make its way into the ailing universe. He was the first one to speak, and I still remember how surprised and pleased I was by what he said.

“I can't tell you how often I pray to Steve for guidance,” Fred said. (Tim’s brother, Steve, had died the year before after a heroic battle with lung cancer.) “I'm so grateful to you for having made that connection for me.”

That night, before we hung up, I spoke briefly to (Fred’s wife) Joanne and the two of us shared a laugh. Then, with Fred back on the line, I told him again how much I loved him.

They were the last spoken words we would ever exchange.