Someone To Tell It To

In 2012, two ministers in Pennsylvania stepped away from traditional church work to form a remarkable non-profit called Someone To Tell It To. The mission of Michael Gingerich and Tom Kaden was as radical as it was simple: They would be there to listen—in person, on the telephone, via email or Skype—to anyone who needed a loving, attentive, non-judgmental ear. They would listen to people who wanted to share about anything at all, free of charge.

So, initially through word of mouth and referrals from friends and acquaintances, Tom and Michael, always together, listened to the bereaved, the lonely, the depressed, the physically ill, the angry and bitter—many of whom had never before shared the tattered truth of their insides with anyone. The two men didn’t counsel so much as just listen. 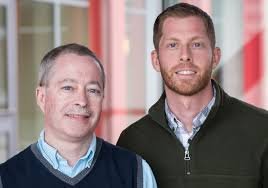 I met them a few months after their journey began. Much of their inspiration had come from Fred Rogers and the two had found meaning in the memoir of my friendship with Fred, I’m Proud of You. From our first telephone conversation, it was obvious that the three of us shared a belief that one of humankind’s greatest afflictions is not the inevitable suffering of life, but isolation and loneliness and the shame of believing that we are the only ones who struggle.

I remember thinking how awed Fred would have been by Tom and Michael. I also remembering wondering how in the world they were going to pull this off. As Fred said, one of life’s great challenges is making goodness attractive. Another challenge, it could be said, is making a living with goodness. My new friends had families to support. Now, suddenly, they would rely almost exclusively on the financial generosity of others. What’s more, in the early days, Tom and Michael did all the listening while trying to fundraise and administrate their new endeavor. Like I said, how in the world?

Seven years later, not only are they still upright, but Someone To Tell It To thrives and is growing, with fifteen other trained compassionate listeners. Prestigious people from across Pennsylvania have been inspired to serve on the board of directors. STTIT has been endorsed by prominent authors in their field and Tom and Michael have published two compelling books of their own. 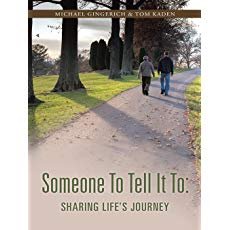 They have conducted listening seminars for hundreds of hospice workers, teachers and business people. Last year they were invited to speak at the annual meeting of the International Listening Association in Dublin Ireland. To date, Someone To Tell It To has engaged in compassionate listening on over ten thousand occasions with people around the world. In the vast majority of cases, Tom and Michael have been the listeners.

And this week they launch a podcast. I’m deeply humbled they chose me to be their first guest. Click here to listen.

When I talked to my friends a few days ago, I wondered again: How in the world?

“Perseverance,” Michael said. “We just learned more and more to be less afraid, to take risks, to ask for help.”

“Our faith has also come into play,” Tom said. “We just believe that if we work hard and give our best every day, things do fall into place, not necessarily on our schedule, but they fall into place.”

I asked them if, during the many hard times, they ever considered giving up.

“It’s never gotten that far, but there have been times when we have questioned,” Michael said. “But then a check would come in unexpectedly that would allow us to pay our bills. Or an endorsement or an email from someone saying that we made a difference.”

In my mind, that last sentence most explains why Someone To Tell It To has endured and is growing. Simply put, Tom and Michael have made a difference in the most profound way, planting a seed of grace and self-worth in every suffering person with whom they interact. 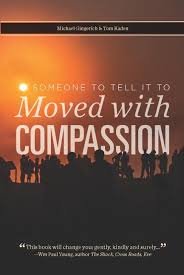 I’ve long believed that my friends, with people like Fred Rogers and the Catholic writer Henri Nouwen, are on the cutting edge of a great human movement, part of our evolution as a species. Gradually more and more of us have come to know that suffering is not a defect of character but a universal part of the human condition, part of shared humanity—and that we need not suffer alone.

In our recent book, Getting Grief Right: Finding Your Story of Love in the Sorrow of Loss, therapist Patrick O’Malley and I pointed to Someone To Tell It Too as another compelling invitation for humans to step out of the painful shadows. In our book, we included a passage from the first book of Tom and Michael:

We all want and need to be heard, to know that others listen and care. We crave intimacy. We are in a constant search for validation and for our voices to find resonance with the lives of others…We have seen this need again and again during our years—visiting people who have been homebound or in hospital rooms, or as we’ve sat with someone grieving the death of a loved one, or comforted those in distress, pain, loneliness or uncertainty. We have also experienced this need firsthand as we have grappled with our own families’ challenges with cancer, financial pressures, career directions and disability. We have learned how all of us at times vitally need to be heard. We need someone to listen so our struggles and our questions are shared and not ours alone to bear.

That’s why the impact of Tom and Michael and their organization will grow in the coming years, exponentially, in my mind. The need for the human connection that they provide is so vast. They—and we—have only begun.

For more information on Someone To Tell It To, visit https://someonetotellitto.org/.