The Day Kirk Gibson Challenged His Dodger Teammates to Fight: An Excerpt from Extra Innings

July 7 is the official publication date of my new book, Extra Innings. I love the story of Fred's Claire's inspiring fight against cancer at City of Hope National Medical Center in California, one of the world's finest medical institutions. But as general manager of the Los Angeles Dodgers, Fred was also the architect of the team's last World Series championship in 1988, and the book is full of pretty delicious stuff from recent baseball history.

During my research, I conducted two highly entertaining interviews with Kirk Gibson, the leader of the 1988 championship team. Below is an Extra Innings excerpt that describes how Fred brought Gibson to Los Angeles, and what happened next.

The Winter Meetings of Major League baseball general managers are part rumor mill and part flea market, times for bartering, negotiating and trade making. In the 1987 meetings, Claire made it known that he was ready to deal. But his colleagues quickly noticed that the new Dodger general manager went about his job much differently than his predecessor.

“I wouldn’t say that arrogance preceded Fred, but I would say the Dodgers felt that they held a special place in the baseball firmament and that related to all things baseball,” Sandy Alderson, the general manager of the Oakland A’s at the time, said in a 2019 interview. “Working with Fred, obviously his experience in the game up to that point had not been specifically related to the game itself, development or scouting. But he had certainly absorbed a tremendous amount about the game, was very knowledgeable and capable. “Fred also came armed with an engaging personality. Believe me, that goes a long way,” Alderson said. “I think people genuinely liked him. People within the Dodger organization and people who had dealt with him in the LA media felt he was a basically a nice guy, pleasant and respectful. Because of all those things, people gave him the benefit of the doubt, which everybody needs at the outset.”

Alderson was Claire’s partner in his first blockbuster trade. The Dodgers agreed to send Bob Welch, a young and much coveted starting pitcher, to the A’s in exchange for shortstop Alfredo Griffin and reliever Jay Howell. This was part of a three-team trade that also involved the New York Mets and brought left-handed relief pitcher Jesse Orosco to the Dodgers. The new players instantly plugged three of the Dodgers’ most glaring holes.

Claire and the Dodgers then turned their attentions to Detroit Tigers outfielder Kirk Gibson, a free agent that year. Gibson had also been an All-American football player at Michigan State, and he brought a gritty, gridiron mentality to baseball. In nine years with the Tigers, he had put up elite statistics for home runs, runs batted in and stolen bases, but it was his attitude that Claire most coveted.

Claire had done his homework. He learned that a highly respected scout in Wisconsin, Dale McReynolds, had submitted stellar reports on Gibson going back to the player’s college days.

“Dale was never one to go overboard on a player, but when I saw his reports on Kirk, I called him,” Claire recalled years later. “Dale confirmed every glowing word he had put on paper.”

Gibson’s courtship would be the beginning of a relationship with Claire that endured for more than three decades but was not without its rocky moments.

“I had some great encounters with Fred over the years, but I always respected him, and he always respected me,” Gibson remembered in 2019. “We actually grew closer through our disagreements. I remember one day with Fred and (manager) Tommy Lasorda, it got a little confrontational. Fred kind of raised his voice and said, ‘Young man, you’re not talking to Fred Claire. You’re talking to the Dodgers.’ I came right back and said, ‘I don’t care who I’m talking to.’ He put his glasses on the top of his head and got in my face, and I got in his face. But you know what? I always loved Fred, his passion and his delivery, and he never held it against me either. I thought, ‘This is the guy I want in my foxhole.’”

In the winter of 1988, Dodger owner Peter O’Malley and Lasorda joined Claire in an all-out effort to lure Gibson to Southern California.

“They were very aggressive,” Gibson recalled. “I was a Michigan boy, a Midwest boy, and so now you meet Fred, and what he represents, and you meet Tommy and you meet Peter O’Malley, and you go to Dodger Stadium and it’s like, holy shit, it’s Hollywood, you know? It’s beautiful. It wasn’t hard to sell that place. And very honestly, Fred, Tommy and Peter O’Malley were very convincing.” 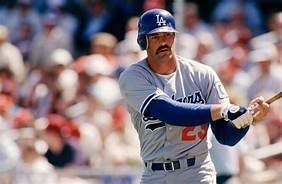 Claire signed Gibson to a three-year contract. The two of them sat down to dinner shortly thereafter.

“I told Fred, ‘I’m pretty serious, and I’m going to be intense. Don’t be surprised. I might have to kick some ass,’” Gibson recalled. “I had won one World Series, and I wanted to win another. I didn’t want to live in California to go to Hollywood. Fred said something like, ‘Why do you think you’re here?’”

In his first nine big leagues seasons with the Tigers, Gibson had played for Hall of Fame manager Sparky Anderson.

When Gibson reported to his first spring training with the Dodgers, he found a different atmosphere altogether: “Everyone was screwing around and it was real loud and they were all yelling at Tommy.”

One day, clowns literally jumped out of equipment trunks that had been placed in the middle of the locker room. The jollity carried over onto the field. During a fielding drill, Dodgers star Pedro Guerrero picked up a ball and hurled it into the outfield.

“Everybody started laughing, and I thought, ‘What’s funny about that?’” Gibson recalled. “Quite frankly I was a little nervous about our lack of focus. That went on every day.”

Gibson, on the other hand, planned to play every preseason game like it was the seventh game of the World Series. The Dodgers’ spring training opener was against the Japanese national team. During warmups, Gibson ran outfield sprints with an intensity that caused his hat to fly off. Teammates and spectators immediately began to laugh.

“Kirk couldn’t understand the reaction until he reached up to his forehead and eye-black, that thick, greasy material use by athletes to deflect potentially blinding rays of the sun, came off in his hand,” Claire wrote in his memoir.

A teammate had secretly spread the goo inside Gibson’s cap and now it was smeared across his face. Gibson snapped and left the field, making for the clubhouse. Lasorda asked Gibson to return, but he refused.

Newly acquired relief pitcher Jay Howell was in the Dodger clubhouse when Gibson came storming in and remembered him throwing his stuff in his locker and stripping off his uniform. “I thought, ‘This ain’t right,’” Howell recalled more than thirty years later. “I could see the eye-black and Gibson raising holy hell and yelling, ‘No wonder you guys finished last.’ I mean it went on and on and I was like, ‘Whoa, what do we have here?’”

The memory also remained vivid for Gibson: “I told Tommy, ‘Go get the bastard who did the eye-black.’ I said, ‘We’ve got clowns jumping out of the trunks. We do drills, and we’re throwing it into right field and everybody is laughing. There is nothing funny about that.’ That was just me being me. I’m taking no prisoners. I’m full go. Nobody knew that and nobody realized that. Tommy said, ‘They’re trying to make you feel welcome.’ I said, ‘I don’t want to feel welcome. I want to win. I’m not looking for friends; I’m looking for people who get after it.’ They wouldn’t go get the guy, so I left.”

Gibson met Lasorda and Claire early the next morning. The manager pleaded with his new star player to calm down, asking that when reporters questioned him, Gibson should attribute his absence the previous day to an unexpected family matter. The player refused: “I said, ‘This is what’s going to happen. Before the meeting, whoever did it needs to come up and I’ll talk to them. And secondly, when we have our meeting, I’ll speak. Either this happens or I’m out of here. Maybe I came to the wrong place.’ I didn’t care what happened. All I knew was that I was going to say what I had to say, and if they didn’t like me, they could get rid of me. Either I had made a terrible mistake or they were willing to change.”

“I told Orosco, ‘You know what, I’m the best teammate you’ve ever had but you screw with me one more time, you won’t pitch another inning in your life. Sorry man.’”

Then Gibson addressed the team: “I just stood up and I said, ‘You guys are a bunch of losers. You’ve lost the last how many years? It’s not hard to see why. You come in here and it’s a big comedy show. Winning is what’s fun to me.’”

Gibson saw jaws dropping as he looked around the room at his teammates.

“I can tell by the look on your faces that you don’t know quite how to take me,” he said. “But I will sacrifice for all of you in here.”

Then he challenged his new teammates to a fight, all of them at once if need be.

There were no takers.

“That was magnificent,” Jay Howell recalled. “That was just theater. It was grand theater. I mean, I had visions of Clint Eastwood.”

Claire later wrote, “After one game in the spring, Kirk Gibson had assumed control of the Dodger clubhouse.”

His teammates learned immediately that Gibson was not just talk.

“Every single day for the next six months he backed it up,” said Tim Belcher, a rookie starting pitcher on the 1988 team.

More than three decades later, Belcher remembered that year’s Opening Day. Early in the game, the Dodgers’ second baseman, Steve Sax, led off an inning with a double.

“Before the ball was even thrown back into the infield, Gibson is on the top step of the dugout getting ready to go to the on-deck circle. And he’s screaming at whoever it was that was hitting after Sax, screaming at the top of his lungs, ‘Do your job!’ Get him over [to third]!’ It scared the hell out of everybody, including Lasorda, who was standing right beside him. We’re all looking at each other like, ‘Oh my God.’ It’s the first game of the year in April, and this guy is already so intense. He did that all year. He backed it up.”

You may recall this moment from the 1988 World Series.

To obtain your copy of Extra Innings, click here.