The Eyes of Fred Rogers 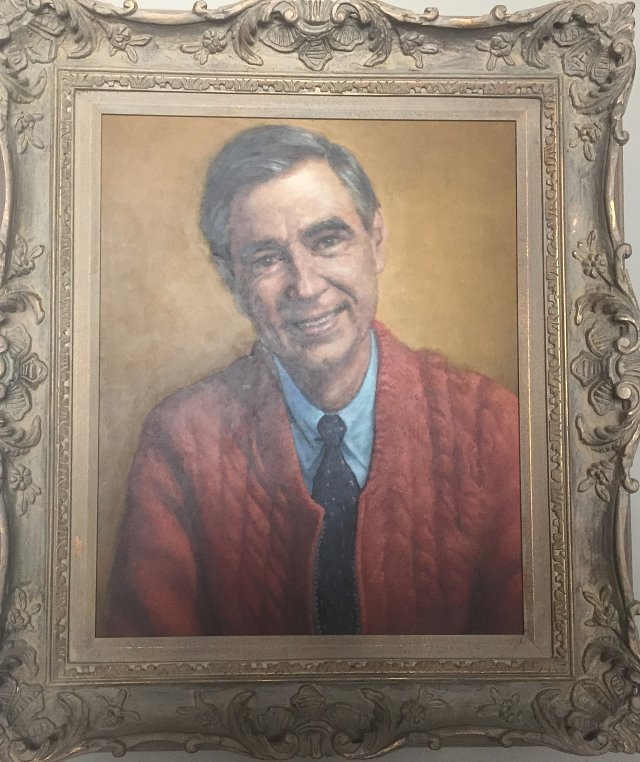 One of my most cherished possessions

This portrait of Fred Rogers hangs at the top of the stairs entering our living room, which means I see it, and make eye contact with Fred, many times each day. Having Fred hanging there changes the molecules in the air of the place where we live.

The artist who created it is another reason why that picture is one of my most cherished possessions. Bob Stuth-Wade is one of the Southwest’s most accomplished painters, and a man who rivals Fred himself in terms of human goodness. Bob and I met in 2014, when I was writing about his son, singer-songwriter Luke Wade, who was then electrifying American audiences on television’s The Voice. Fred came up in my first conversation with Bob, and we immediately agreed that the late icon of children’s television was a secular saint.

A year later, at a Thai restaurant in Fort Worth, with wife, Wanda, and sons Luke and David, Bob unveiled his gift. For the first time, I saw Fred looking back at me from the canvas. Something about his eyes.

Which caused me recently wonder—how do you paint the eyes of Fred Rogers? I called Bob to find out.

It turns out that Fred was not the first. For years, part of Bob’s spiritual practice (in addition to two hours of daily meditation and tai chi) was something he called “paint a saint.” He used his brush to try and capture the essence of human greatness on canvas. He painted Jesus and St. Therese of Lisieux, The Little Flower. He painted Gandhi and the Indian sage Ramana Maharsi. He sketched Lincoln. 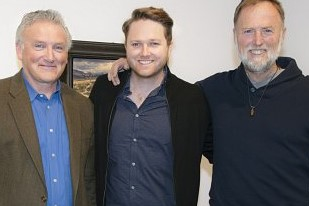 “On the internet, I would look up saints and enlightened people, and go through the images until something resonated with me, and touched my heart,” Bob said. “It’s that look in their eyes, something so subtle. It’s like they see how things really are. They are the love that the world is, and when I look at them, I feel they are seeing me as that same love. That’s the reason I painted them. That spark of life is what I was looking for.

“As social animals, we need eye contact. That’s what kids miss a lot. When I look into the eyes of a saint or Fred Rogers, he’s seeing me and seeing me all the way through to the best of me. After ‘I see you,’ it’s ‘I see I.’ I see myself as I really am because they see me as I really am. From ‘I see you’ to ‘I see I.’”

As I said, I met Luke in 2014. We talked about his star turn on The Voice, but I also found him to be a very thoughtful and soulful young man, and another admirer of Fred Rogers. I told Luke that I had known Fred well, and written a book about our friendship. A short time later, Luke shared our conversation with his dad.

“So, I was doing this practice, paint a saint,” Bob said. “One day, Luke and I were talking and he said, ‘There 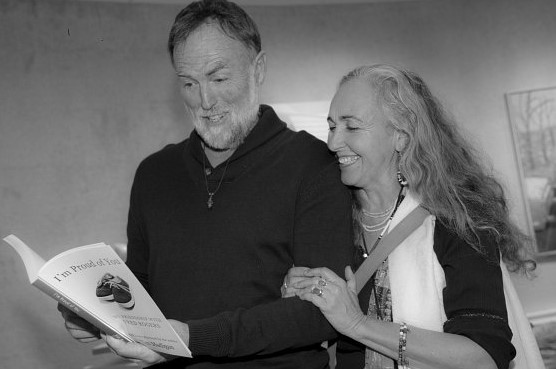 Bob and wife, Wanda, with a certain book.

is a guy out there, Tim Madigan. You’re going to have a bromance when you meet him.’ By then Luke had heard me say that I thought Fred Rogers was an American saint. This was before I knew anything about you or your book. Then we met, and I really liked you, and I was already doing that practice so I thought, ‘I’m going to do Fred Rogers.’”

But Fred was not an easy subject, as saints go.

“I was frustrated because he has those sort of simple, all American features,” Bob said. “It’s not like he’s a gnarled old guru. And in most of the pictures I found of Fred, there wasn’t much drama in the light. He was a normal, regular guy with the normal haircut and the sweater. It was difficult.”

He worked on the portrait in fits and starts, turning the painting toward the wall, setting it aside for several months at a time.

“Finally, the last time I worked on it, I just dove in,” Bob said.

In the end, of course, it was abou 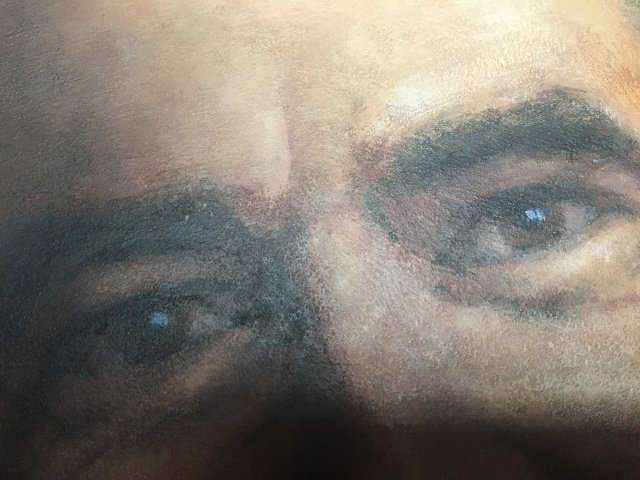 “Technically, there are all sorts of the things about the eyes that I understand, about the way light goes through them and comes out the other side of the iris,” Bob said. “How the wetness of the eyes creates a little highlight. The way the skin folds around the eyes. I understand a lot of that pretty thoroughly.”

Not that it would help Bob finish Fred’s portrait.

“Capturing the subtlety of that expression is beyond conscious control,” he said. “I have to open my heart by looking at that person, looking into those eyes, really try to become that, feel that presence of the person I’m painting. It’s a letting go, rather than a calculated thing.”

So as he studied photographs, Bob opened his heart to the eyes of Mister Rogers. Then came that sacred moment in his studio, after a few final dabs of his brush.

“I felt him looking back at me,” Bob said.

The Right Time For Mister Rogers
A Few Kind Words
Ode to an old friend and a simpler time
Comments
985-245-1730
Fort Worth, Texas, United States