What Television's Fred Rogers and Baseball's Fred Claire Have in Common

My first conversation with Fred Claire took place in April 2019. Not long afterward, hours probably, I was struck by the irony…another great guy named Fred.

I had met the other Fred, Fred Rogers, in the fall of 1995 when I interviewed the children’s television icon for a newspaper story. I was the beneficiary of his human greatness in an unlikely friendship that began then and lasted until his death in 2003. I wrote about our relationship in my memoir, I’m Proud of You.

The two Freds are very different 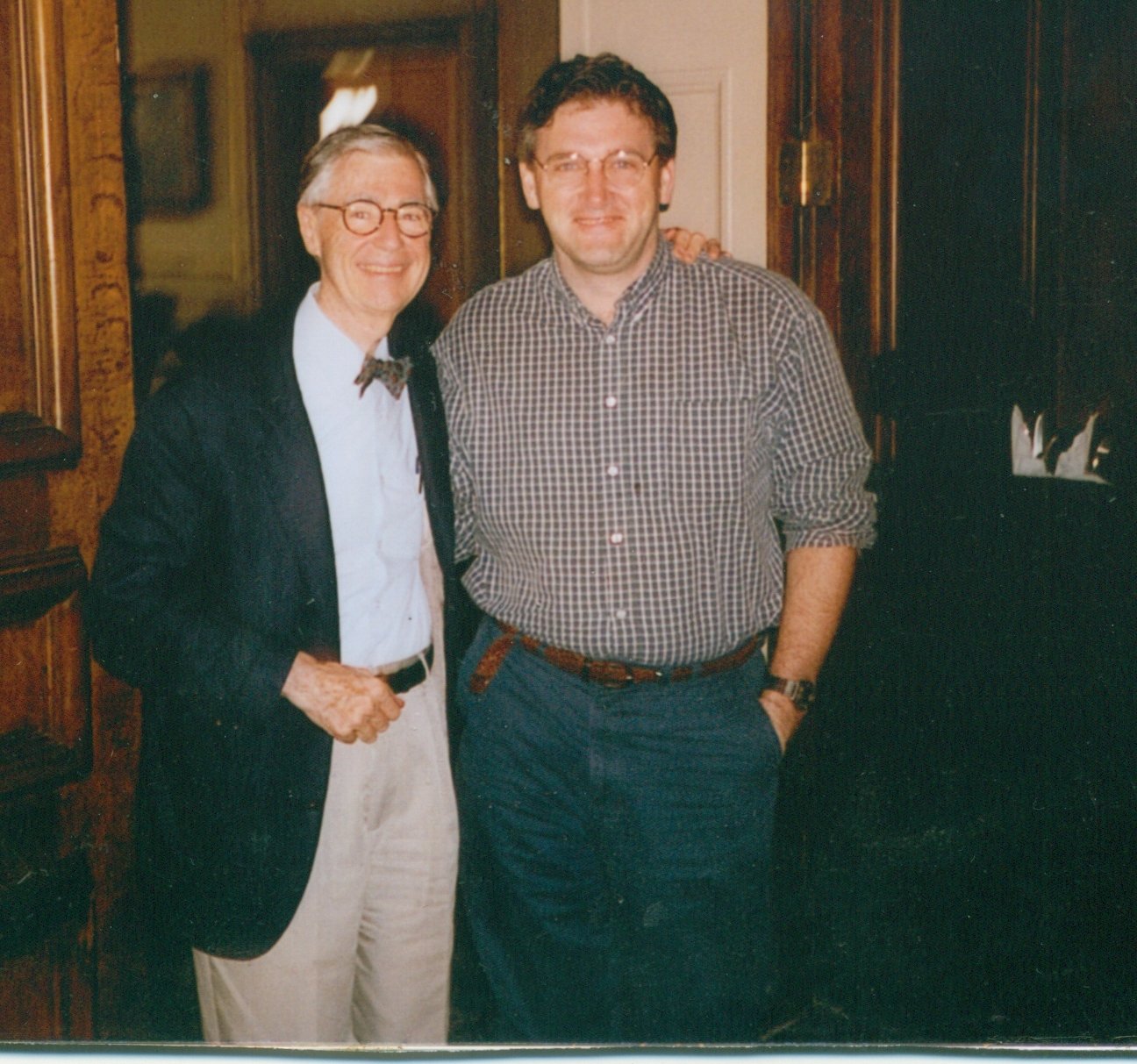 Tim with Fred Rogers in a Pittsburh restaurant in 1997people, to be sure. Fred Rogers was a soft-spoken, gentle soul prone to quaint gestures. Fred Claire, the former general manager of the Los Angeles Dodgers, is a Type A personality all the way. In his mid-eighties today, Fred remains as fiercely competitive as he was in 1988 when he helped orchestrate the Dodgers’ last World Series championship.

In the foreword to Extra Innings, Bill Plaschke, the great sports columnist of the Los Angeles Times, tells this story.

It was the summer of 1990. I was the Dodgers’ beat writer for the Los Angeles Times, and I was standing outside the closed door of Tom Lasorda’s office in the bowels of Dodger Stadium. Inside the manager’s room, one of the toughest players in Dodger history—the great Kirk Gibson—was staring down the kindly general manager, Fred Claire, trying to force Claire to trade him. Gibson thought he could push Claire around like he once pushed that Dennis Eckersley slider into the right field pavilion for the most famous home run in Dodgers history. Gibson was wrong, and standing there with my ear against that closed door, I could hear exactly how wrong.

“You’re not doing your job. You need to trade me!” Gibson shouted.

“You’re not going to tell me how to do my job!” Claire shouted back.

I heard shuffling and cursing and more shuffling.

“Have you ever seen a big bear in the woods?” Gibson shouted. There was more shuffling, more cursing, and I could have sworn I heard a punch thrown. I slowly backed away from the door, and moments later Gibson and Claire both stomped out and walked away in different directions. Inside the office, Lasorda was sitting behind his desk, looking pale, as if he had just witnessed something from a different world.

“Tommy, Tommy, did Gibby punch him?” I breathlessly asked.

“No, no, no, it was the other way around,” said Lasorda. “Fred was going to punch Gibby.”

It’s rather hard to imagine Fred Rogers doing that.

But there are profound similarities between the two Freds, which I was happy to discuss with California media personality Gabriel Segura during a recent podcast interview. (Listen to the podcast at this link. My segment starts at 15:30.)

The most obvious similarity, in my mind, is the utter consistency of their character.

With Fred Claire in 2019 outside his favorite Pasadena greasy spoon. (photo by Rich Kee.)

Fred Rogers, from the moment he woke up in the morning until the time he went to bed at night, was the embodiment of sacred human presence. When he was with you, he was truly with you, no matter who you were or what the circumstances were—entering into each human encounter without his own preoccupations or personal agendas. He would take in whatever another person might share and respond from a place of compassion, love, wisdom and never judgement.

A great example happened in our first telephone conversation.

“Do you know what the most important thing is in my life right now?” Fred Rogers asked me then.

“Mister Rogers, we just met. How could I possibly know that?” I responded.

“Speaking with Mr. Tim Madigan on the telephone,” Fred said.

Meanwhile, for all of his intensity, Fred Claire is grounded in the most noble of the human character traits, integrity, kindness, decency and generosity. He has appropriated the words of Dodger legend Jackie Robinson, turning them into a life motto.

“A life is important only in the impact it has on other lives.”

Fred has spent much of his time in recent years as a college lecturer and has been become known as a tireless mentor to scores of his students, offering his help to any one of them who wanted to ask for it.

It was in 2016, when his skin cancer had spread and he was given a twenty percent chance of survival, that Fred Claire insisted on organizing a celebrity golf tournament to benefit the place where he was being treated, City of Hope National Medical Center.

“I’ve never felt more strongly about anything. We have an opportunity to contribute and can contribute more,” he told me last year. “When you go through cancer, I guess the right word is empathy; you feel empathy for others. You feel it in your heart and in your soul. You want to help.”

This thought just occurred to me—how much the two Freds would have enjoyed and appreciated each other. How blessed I have been to have known them both, and to make the connection now.

I also believe that in this difficult time, we would do well to celebrate the examples of the two Freds and the people in this world who are like them—exemplars of the good.

click here to obtain a copy of the Burning, Tim's definitive book on the Tulsa Race Massacre of 1921