Anything Mentionable: Peter Rivera and the Power of the Drumbeat

Fifty years ago almost to the day, I rode my bike from our neighborhood, down the hill, past the courthouse to the only record store in Crookston, Minnesota, population 8,000. I had just been paid for my summer job, hoeing sugar beets, and would use my very modest salary, (a dollar for a mile-long row, as I recall) to buy my first record album, Rare Earth Live. I raced on my bike back up the hill, scurried down to the basement bedroom I shared with my brother, and put the first disc on the turntable, (it was a double album). Yes, a big moment.

Rare Earth was cool, the first white act signed by Motown Records. Those of us of a certain vintage remember their hits; Born to Wander, I Just Want to Celebrate, Get Ready. But on that sunny summer day so long ago, it wasn’t a song, but the prelude to a song, that made such a lasting impression.

Rare Earth's drummer and lead vocalist Peter Rivera was bantering with the crowd as the band got ready to perform another one of their hits, Hey Big Brother. Then Rivera was interrupted by some dude with a hideous, nasally voice, who ordered people in water near the stage to get out “or they're going to stop the whole thing. Do it now!” The booing began and intensified. The show seemed on the verge of collapse.

Rivera saved it. He said a few words about not wanting anyone to get electrocuted, but it was his percussion work that spoke loudest then. He started tapping out a rhythm on the cymbals then layered on a kick drum. “A little walking music back to you,” Rivera told the crowd. “A little clapping music, too.” Just that quickly, on my new record, the boos were replaced by the sound of thousands of people putting their hands together in time, energy building as the bongos joined in, then the bass and guitars. Finally, Rivera sang the first line, "Hey, Big Brother. As soon as you arrive." Though I didn’t think in those terms at the time, that moment for me has always been an example of the power of music.

On a day in April 2021, I recognized Peter Rivera’s voice on the telephone. Early in our long conversation, I told him about my own late in life quest, how in my mid-fifties a voice took up residence in my head. “Play music,” it said. I practiced guitar several hours a day. I took online singing lessons. I formed a classic rock band called The Love Starved Dogs. On a night in 2019, at age 61, in a small lounge in Fort Worth, I began my performing career by knocking out the opening guitar licks of Jumpin’ Jack Flash.

“It still feels a little ridiculous, like I’m way too late to the game,” I said.

But he understood. Something about the music. Rivera had spent the first year of the pandemic wondering, as I had, whether he would ever get to perform again. When COVID hit, he was still playing dozens of gigs a year around the nation, Rare Earth hits and some new stuff he had written. At age 76, he knew he didn’t have many more years to waste.

“I should get a writing credit,” I said.

“I talked to several of my musician friends around the country, and nobody was playing anything anywhere,” Rivera said about the beginning of the pandemic. “We were like, ‘Oh, Jeez what are we going to do?’ I’m so glad I had a smart attorney who made sure I had a little rainy-day fund. I didn’t have to get really scared about it, but some of my friends didn’t have that. They didn’t know what they were going to do. It’s just a crazy time. 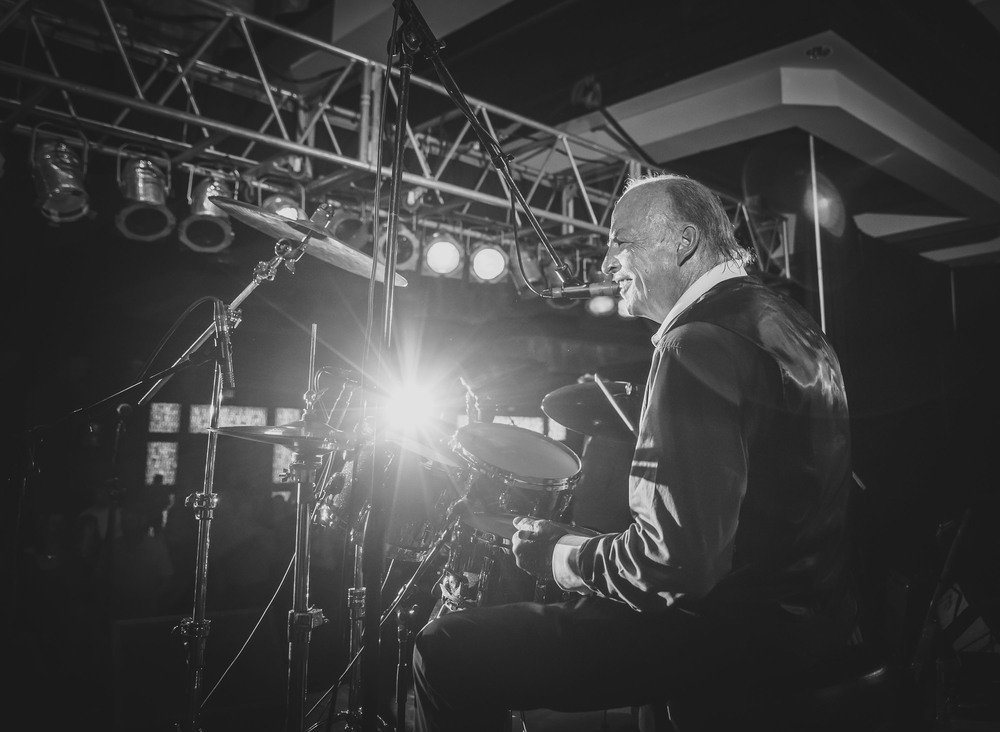 “Now it looks like it’s starting to settle down. I’ve got a show in three weeks. I’m ready to go, ready to roll. I know I’m going to have to work my ass off, getting ready to sing and play drums for two hours, just pumping it, hour after hour. It’s stamina rather than precision. After all these years I have the precision, but I have to have the stamina.

“If I don’t bust my ass, I won’t sound like me. I can’t sing the songs in lower keys. I have to sing Born to Wander, Celebrate, Get Ready, sing them up there where they were. I need to make them sound like they did forty years ago. If I can’t do that anymore, it’s time to go out to pasture.”

“First of all I’m probably an approval suck,” Rivera said. “I want and need that. I’ll say it on stage sometimes. ‘You know why we come out here and give our lives to this stuff. It’s when you give us that applause. That’s what it’s really about.’ I love the applause, and there is nothing wrong with loving the applause.

“Now, when I look around, I’m usually the oldest guy in the room and I go, ‘Wow, isn’t that something.’ But I feel pretty good and in my mind, I’m no age at all. I’m just there to do what I have to do. That’s what’s really good about playing. You don’t have to think about those things when you’re out there. And if you find something you love, go at it 110 percent.”

“There you go,” he said. “A few years ago, I was hanging around, fixing my car and painting my house. It was okay, part of the deal. But when I was doing that, I was not doing what I love. What do I love? Playing music. So I said, ‘Hey man, I’m 71 years old. I’m going to play. That’s all I’m going to do. Somebody else can paint the house. That’s just going to be my escape, to go back to the time when music wasn’t work, it wasn’t effort.’ It was just sheer joy. I’m getting that now. I never thought I would.” 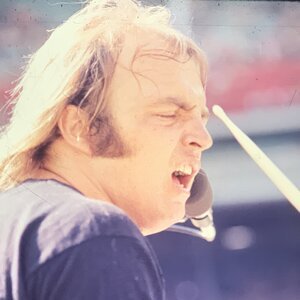 With Rare Earth in the 1970s
Late in our conversation I told Rivera about that summer day in Crookston a half-century before, buying my first album with my beet-hoeing money, Rare Earth Live.

Then I brought up that screeching voice that nearly killed the show. Rivera knew right away what I was talking about, imitating the voice exactly as I remembered it.

“If you don’t get out of the water, we’ll stop the whole thing.”

We laughed. I told him what an impression that moment had made on me, and why.

“Let me put you there, Tim,” Rivera said.

The gig that night was at Miami Marine Stadium, a huge water sports and speed boat venue with a 7,000-seat grandstand facing the water.

“We were on some island at the house of a big record exec, it’s all shrimp cocktail and that kind of thing. It’s time to go to the show and we get on this big cabin cruiser and I’m nervous as hell. So we’re moving down this inlet, and in the distance you saw this glow, and as we started toward that glow I suddenly realized that it’s a stadium facing the water, it’s all lit and the place is packed.”

The stage was on a barge sitting in the water a few feet in front of the stands. People had jumped in and were floating there, or hanging from cables leading from the barge to the stadium.

“We got off the boat and my brain was just crazy. It was so impressive, the size of this place, and how bright it was and here we are. To me it was one of the greatest stages in the world and I was going to get to walk out there. So I went to the drums and I’m picking up the sticks and my stomach is going crazy.

“Suddenly this guy comes up behind me. He he puts his hand on my shoulder and he leans into my ear. I’m not looking at him. I thought he was a roadie. He said, ‘You’re going to have to make an announcement that people are going to have to get out of the water or we’re going to have to shut the whole thing down.’ I went, ‘Oh, man, I can’t get into that. Here’s the mic.”

Then the hideous, nasally voice.

“I’m thinking, holy shit,” Rivera remembered. “Here’s this beautiful thing and we’re going to screw it up by telling people what they have to do. I didn’t want anybody getting hurt, but I was thinking, ‘I hope this doesn’t take too long because I don’t want to lose my buzz.’ I was buzzed and when you’re buzzed you want to go. When you do a show for a crowd like that, you want to be buzzed, you want it to be electric. But drummers know they can drum right through train wrecks. So I started pounding on the drums, ‘A little walking music back to you,’ just to let people know that we were going to play. People have asked me about that for fifty years and I tell them that story.”

Rivera said there was never any thought to editing the announcement from the album's final cut.

“It was something that happened in that show, so why not leave it on the record,” he said. “That guy is walking around some place, or at least I hope he is. I wonder if he knows that his voice is on millions of albums.”

“That opening bit from Hey, Big Brother is stamped on my soul as few things are,” I said. “Who knew that after all these years I would get to talk to the guy whose drum beat saved the show.”

“Wow, thank you for that,” Rivera said. “You know the one thing that was really cool about the guy who did the talking on the album? We never had to pay him. He did it for free.”

We laughed together one last time.

Listen to Hey Big Brother from Rare Earth Live at this link.

To purchase any of my books, including The Burning, the Tulsa Race Massacre of 1921; I’m Proud of You: My Friendship With Fred Rogers, and Getting Grief Right: Finding Your Story of Love in the Story of Loss (with grief therapist Patrick O’Malley) visit my Amazon page at this link.

Rare Earth classic rock
29Jun
Something to say; Time to say it
My New Life With An Electric Car: A Love Story
Anything Mentionable: Vin Scully, Backyard Butterflies, and the Meaning of Life
Comments
985-245-1730
Fort Worth, Texas, United States