NOT the usual BS young men were often reared on: The literary debut of Dr. Craig Bowron

Today (Tuesday, October 18, 2022) is the official publication date of Man Overboard: A Medical Lifeline for the Aging Male. Published by Mayo Clinic Press, it is the literary debut of my good friend, Dr. Craig Bowron, who lives around the corner from my sister, Terri, in St. Paul.

I know from some experience that when you are working on a book, the “pub date,” as it is known in the trade, often seems so far off as to be hallucinatory. That’s one reason why I’m so happy for Craig. Today it gets real. But I’ve also known that this day was inevitable for him, because he has so much to say and such a unique, elegant, compassionate and witty way of saying it. 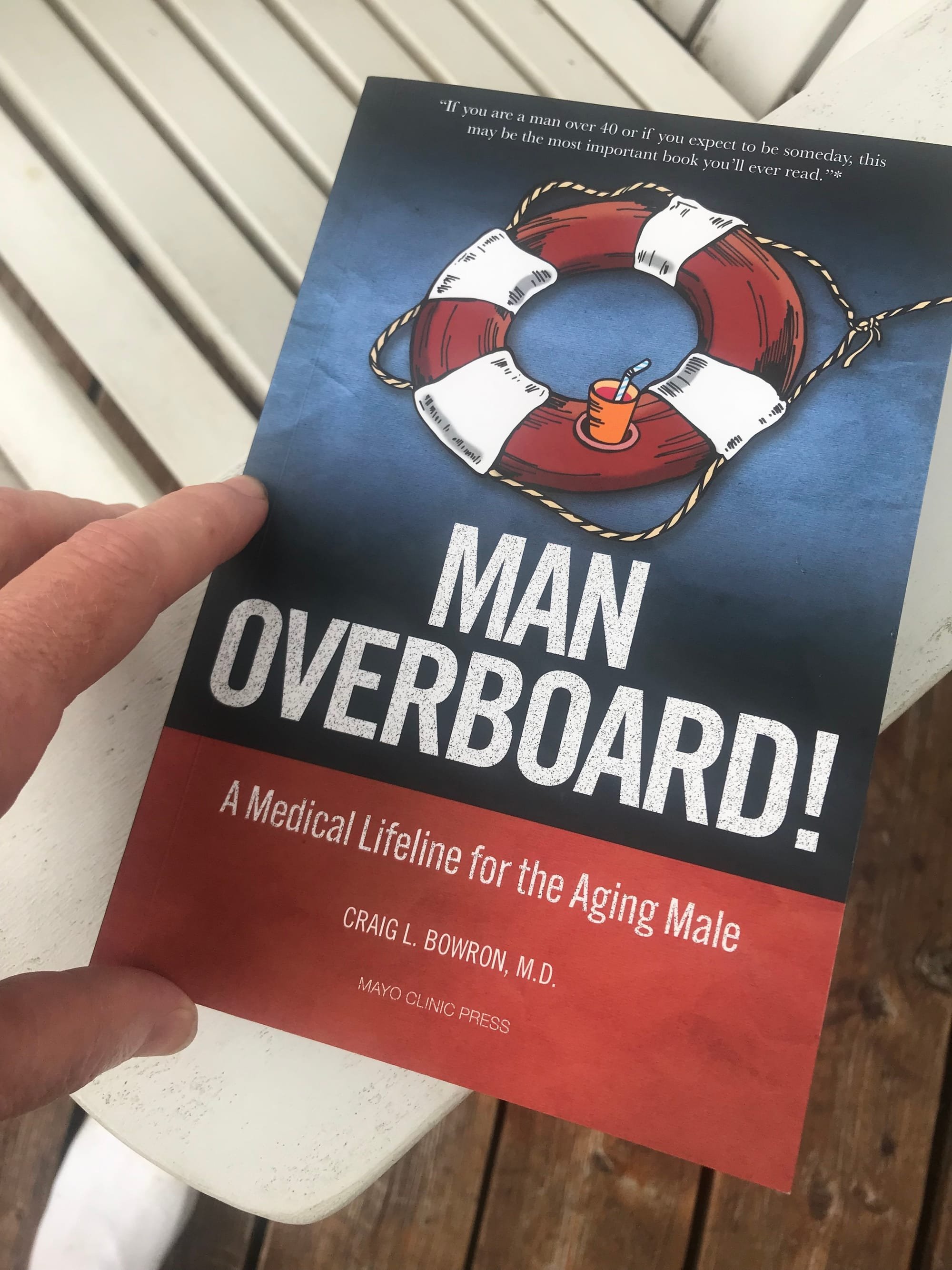 Craig and I have known each other for more than a decade, since the time my father was in the final stages of Alzheimer’s disease. My parents were living with Terri and her family at the time. Craig and his family were good friends. From those days, I remember Craig as such a comforting presence at dad’s bedside. Not that there was really anything medically to be done at that point, but the esteemed physician was there to assure us, in his gentle way, that my dad’s transition was happening as it should.

Craig and I got to talking back then. He had learned that I was a writer by trade and he mentioned that he had done a little writing himself. I should say. Over the past decades, Craig has written scores of essays on medical topics that have been published by leading media outlets in Minnesota and several national publications. All were done in that inimitable style I mentioned before. That’s how Man Overboard is written, and then some.

I think Craig’s new book will be read in at least two ways, often by the same person. The first way, the traditional way, is cover to cover, because the book is very entertaining. Which leads to the second way. I think Man Overboard will sit on many bookshelves, waiting for the inevitable moment when the realities of aging (or just living) catch up. It will be and should be a resource of the first resort when hair loss or Low T becomes a thing, or, more seriously, heart disease or prostate cancer.

Craig covers it all in very thorough but accessible ways. Readers will also gain valuable insight into how good doctors think, (Craig clearly is one) and, by inference, how not-so-good doctors think.

But to me, one of the most important chapters in Man Overboard comes late, and involves a topic that defies easy medical diagnosis or scientific analysis. Over the years, Craig and I have often discussed the existential inner pain that is part of almost every human life. A big part of my own public message over the years has been to try to normalize that kind of suffering. The so-called negative emotions are not character defects, but part of the human condition. Craig has always agreed about that.

Yet in a book about medical stuff, I was surprised and delighted by Craig’s profound and compassionate take on this essential aspect of humanity.

The title of Chapter 21 is:

Mental Health Finally Gets Its Due. Turns Out, Everyone Struggles: Some More, Some Less.

It is with great pleasure I offer you Craig’s beautiful overture to that chapter.

My parents didn't have a parenting philosophy outside of, “Go to school. Be home by dinner. Make something of yourself. Leave your brother alone.” Although I felt deeply loved and cared for, it was a “PB & J with apple and chips” physical world. What you saw was all there was.

School was readin’, writin’, and ‘rithmetic. The teachers weren't there to raise our emotional IQ. Church was mostly about benevolence (the poor, the sick, the hungry) and redemption (how to avoid becoming extra crispy in the lake of fire). Only salvation could bring inner peace. Doubts, fears, worries, struggles were courtesy of the Other Guy, not God, and should be opposed by prayer. 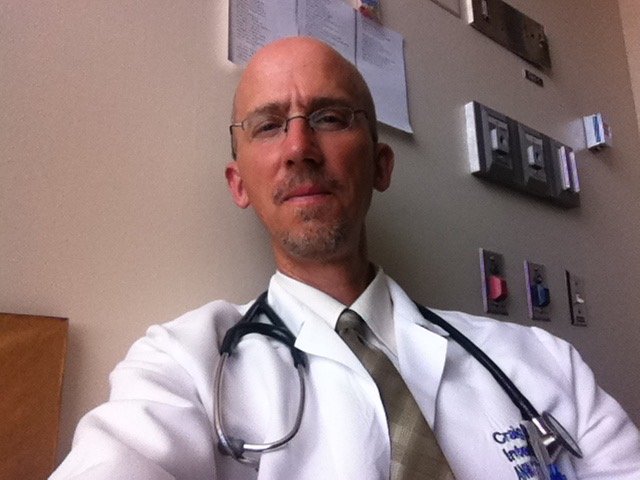 Dr. Craig Bowron
When it came to male role models, it appeared that action heroes and professional athletes were what I should be shooting for. Contemplative, introspective men like Gandhi, Henry David Thoreau or Mr. Rogers were no match for steely men of action like John Wayne, James Bond or Starsky & Hutch. The budding writer John-Boy on the TV series The Waltons was the only male who seemed willing to wrestle with his innermost thoughts and feelings. Strange things happen in the hills of Appalachia.

I was not emotionally suppressed as a boy, but if there were such things as emotions, it seemed as if girls got most of them. Like braids, long hair, jump rope—that was their thing.

My father's father died in an accident when my dad was eight. I asked him a number of times how the tragic loss affected him and the answer—“I don't know, I was just a kid”—always ended the conversation. His answer may have been a lie or a dodge, but I suspect it was simply the message he was given: “suck it up,” “stay strong”—the usual bullshit young men were often reared on.

The Mentally Ill Are Insane and Everyone Else is Normal

Within this emotional and “inner life” vacuum, the only people I knew who were experiencing mental illness were cooped up in a state mental hospital a couple of towns upriver from my hometown. We rarely drove past its sprawling thousand-plus-acre campus, but when we did, it was spooky, a collection of ancient brick buildings that made it look like Dracula University. (What did commencement look like—capes over capes?) The message was clear: mental health applied to the insane and occurred at a distance, to someone else.

If you didn’t grow up near a state mental hospital, and I'm guessing you didn't, then your only other exposure to mental health issues was probably through the TV or movies, where deranged criminality sells. If serial killers such as the paranoid schizophrenic Son of Sam or Jeffrey Dahmer, with his borderline personality disorder were in short supply, we could count on Hollywood to fill the gap with characters like Hannibal Lecter, whose struggles with homicidal cannibalism were hardly meant to be a public service announcement for antisocial personality disorder. We were to be titillated and entertained.

All of this had the effect of making relatively uncommon mental health diagnoses seem more like the norm, and also far more criminal than they are. When in actuality, the most common mental health issues are mood disorders like anxiety and depression. The vast majority of those struggling with their mental health are not insisting that T Mobile, or the Pope, or the long-since-dead high school English teacher is controlling the voices in their heads. They are wondering if they will ever feel like smiling again, or if the (apparent) calmness they see in others will ever be theirs.

Everyone Struggles With Their Mental Health—Some More, Some Less

According to the National Alliance on Mental Illness, 16 million American adults live with serious depression, and 42 million live with an anxiety disorder. That makes anxiety and depression far and away the leading mental health issues, and it's not uncommon to have some mix of the two. It's depressing to always feel anxious, and dealing with the darkness and the inertness of depression can be anxiety provoking. Those with bipolar disorder tend to swing back and forth between high-energy manic phases and deep depression.

But here's the kicker: everyone struggles with their mental health. It’s just a matter of degrees.

Although each year 1 in 5 adult Americans experience mental illness and 1 in 20 will experience serious mental illness, the remaining 80 percent of the population isn't necessarily stuck on calm and happy. Our moods are not binary, like an on-off switch for a light, but more like lights on a dimmer switch. The light comes up and down, and it is not always clear who or what is in control.

You don't need to have an official diagnosis of anxiety or depression to deal with the feelings of anxiety and depression: you only need to be human. So wherever one is on the mental health spectrum, it is nice to know something objective about the most subjective and abstract of things, our moods.

Craig then goes on to teach us something objective about the struggles that go on inside every human. So treat yourself. Buy Man Overboard at this link, and read on.

To purchase any of my books, including The Burning, the Tulsa Race Massacre of 1921; I’m Proud of You: My Friendship With Fred Rogers, Getting Grief Right: Finding Your Story of Love in the Story of Loss (with grief therapist Patrick O’Malley) and Extra Innings: Fred’s Claire’s Journey to City of Hope and Finding a World Championship Team, visit my Amazon page at this link.

29Jun
Something to say; Time to say it
Anything Mentionable: Peter Rivera and the Power of the Drumbeat
My New Life With An Electric Car: A Love Story
Comments
985-245-1730
Fort Worth, Texas, United States